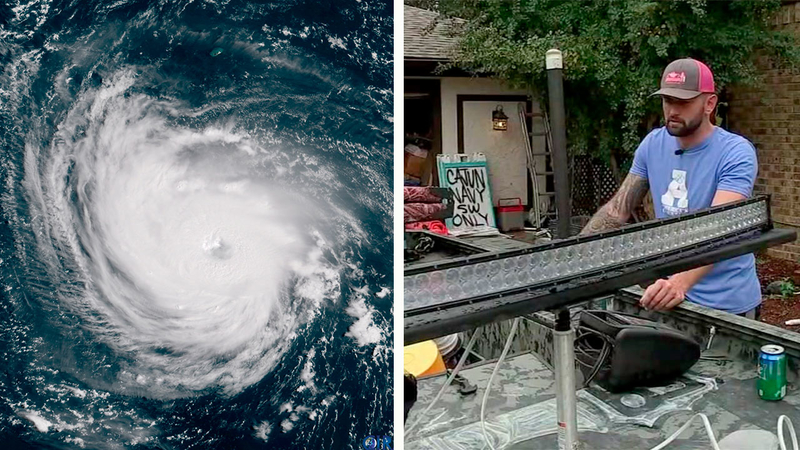 WRIGHTSVILLE BEACH, North Carolina (KTRK) -- Eyewitness News caught up with Taylor Fontenot as he packed for yet another trip with America's Cajun Navy. As he sorted dive gear, rappelling harnesses, first aid supplies, a chainsaw and Texans football cleats, Fontenot looked back to how it all started for him last August.

"I went out that first night and going out and saving people, saved my life. I was in a good place and I just haven't stopped. We did 35,000 rescues in 10 days. That was insane," Fontenot said.

Letting out a half smile peek from his tired face, he added, "Adrenaline, I found out, is a hell of a drug."

Fontenot is a roofer by trade, but before Harvey, he had no rescue experience. Since Hurricane Harvey, it's been a busy year for the Sugar Land man.

He was in the Florida Keys for Hurricane Irma, and he supported teams in Puerto Rico following Hurricane Maria.

"We had two teams there, and over six weeks, we distributed 300,000 meals," he proudly pointing out.

He was in Mobile, Alabama days ago for Tropical Storm Gordon, and now he is on his way to the Carolina coast.

Taylor is set to leave his Sugar Land home Wednesday morning for the Carolinas to await flooding that some storm watchers are calling this year's Harvey.

"They're talking landfall as a (Category) 4 with 140 mph winds, 60 miles inland. Then, stalling and raining six days' worth of rain in 48 hours," he said.

If that happens, storm experts predict severe inland flooding, which is why his teams are coming.

Fontenot expects between 200 and 300 boats from Texas and Louisiana will make the 18-hour trip. He says hundreds more will join them from the East Coast.

Fontenot worries there is no magical funding for their efforts. It's volunteer hours and donated gas money, and in what's been an incredibly busy year, those funds are running pretty low for America's Cajun Navy. It doesn't matter, the forecast calls for flooding, and he sees himself as part of the answer to save lives.

"We will go and do everything we can and see if we can keep it a zero casualty event," he said.

ABC13's Nick Natario speaks to a member of the Cajun Navy as the group seeks donations a year after Harvey.