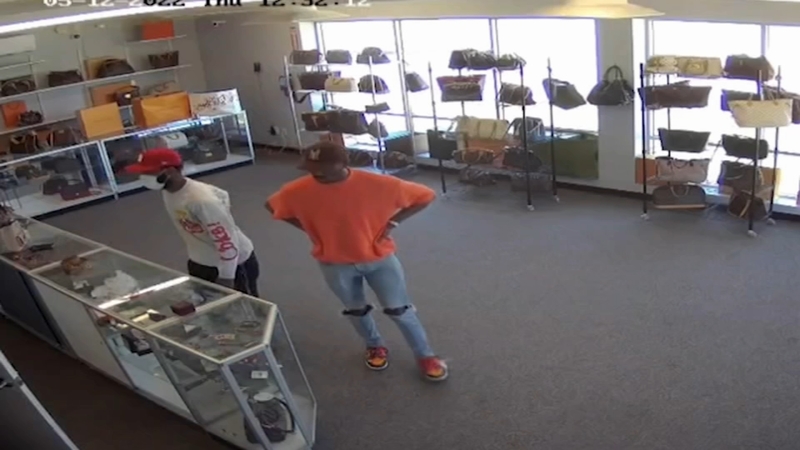 Meme's Treasures has several surveillance systems now because they've been robbed twice before. Their alarms failed in 2019 when thieves got away with about $150,000 worth of merchandise at their location in Pearland. They moved to Alvin and put up more cameras thinking they'd be more secure.

However, the video shows how bold thieves have become. The owner, Melissa Knape, said she turned her back for just a few seconds to check on her child on Thursday afternoon.

That's all the time it took for one of the men to reach over the display case and pocket a $15,000 Rolex.

Both men had ball caps on. One was wearing a mask and a distinctive gold and diamond ring. Knape said they drove up in a U-Haul truck, and neither would make eye contact with her.

She eventually asked for identification, and she said they showed her a fake. She told them they couldn't see any more bags or jewelry after that. That's when she said they left.

Knape filed a police report and posted images of the men online. She offered her own reward for information. She said it was worth it to show that small business owners shouldn't be taken advantage of.

"I've been doing this for 16 years. So, losing one Rolex does not dissuade me from all of the thousands of great people I have met. Unfortunately, there are bad people in the world. The majority of people who shop with us are amazing. They're like my family, and we can't leave them behind. So, we are going to keep on trucking. We're just going to have new security measures," Knape said.

From now on at Meme's Treasures, Knape said hats and masks won't be allowed. People will be required to show identification to come in, and there will be armed security at the store.

Investigators urge anyone with information about the robbery to call Alvin police and ask for Detective Bobby Vincent.