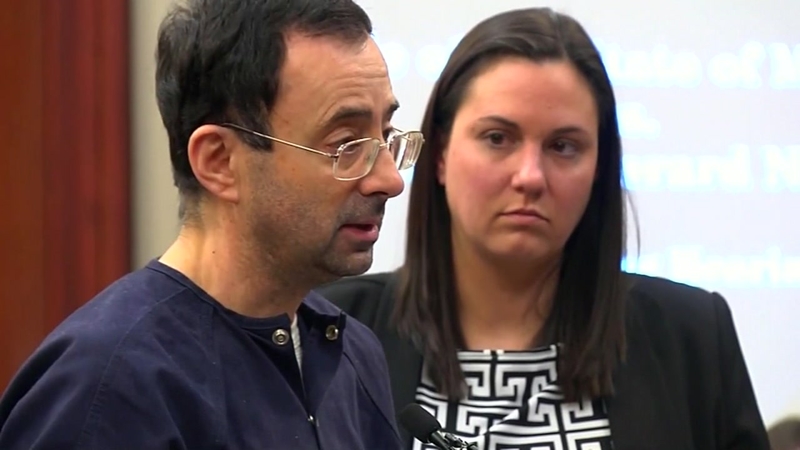 LANSING, Michigan (KTRK) -- All members of the USA Gymnastics Board of Directors have resigned amid fallout from the Larry Nassar sex abuse case.

According to a USA Gymnastics statement, the organization received all resignations of its members as required by the United States Olympic Committee.

"USA Gymnastics thanks the Board members for their service. We are grateful for the time and effort each has devoted to USA Gymnastics. We are in the process of moving forward with forming an interim Board of Directors during the month of February, in accordance with the USOC's requirements. USA Gymnastics will provide information about this process within the next few days.

USA Gymnastics embraces not only the changes necessary as called for by the USOC and the Deborah Daniels report, but we also will hold the organization to the highest standards of care and safety in further developing a culture of empowerment for our athletes and members,"the statement read.

Judge Janice Cunningham gave the figure as another sentencing hearing for Nassar began. Previously, the total number of sexual assault victims was estimated below 200. More women and girls have been coming forward in the wake of Nassar's highly publicized sentencing hearing last week in Lansing.

The hearing that started Wednesday centers on sexual assaults at Twistars, the Lansing-area gymnastics club that was run by 2012 Olympic coach John Geddert. In this case, Nassar has admitted to sexually abusing three girls under the guise of treatment.

Roughly 60 women and girls plan to confront him or have their statement read in the courtroom in Charlotte, a city outside Lansing.