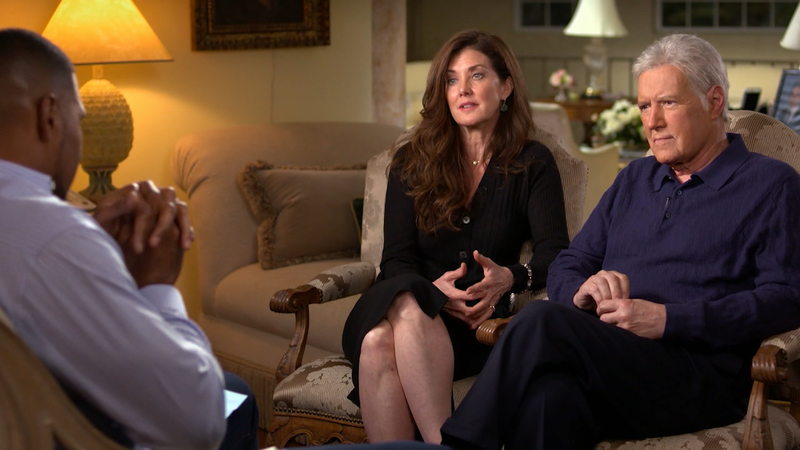 Longtime "Jeopardy!" host Alex Trebek and his wife sat down with Good Morning America to share their experiences dealing with the 79-year-old's pancreatic cancer and a special message to fans.

Trebek announced in March 2019 that he was diagnosed with stage 4 pancreatic cancer and has since become an outspoken advocate, raising awareness about the disease and the symptoms.

Referring to the moment he was diagnosed, the television personality said he knew the news was bad when his doctor mentioned the pancreas. All stages of pancreatic cancer combined have an overall 9% five-year survival rate, according to reports by the American Cancer Society.

"Throughout my life, I've always wondered about how courageous a human being I was ... I just look at it as, it's part of life ... does that mean I'm courageous because I'm dealing with it? No. I could be scared to death, and I'd still have to deal with it. But I'm not scared to death. So maybe I am courageous. Way to go, Alex!"
RELATED: 'Jeopardy!' host Alex Trebek gets emotional over contestant's answer

Jean Trebek, the game show host's wife of 29 years, said the hardest part for her is seeing her husband in pain. Alex also admitted that Jean has a tough job as a caretaker, always worrying about his wellbeing.

"I'm not always the most pleasant person to be around when I'm experiencing severe pain or depression. She has to tread lightly around me," he said.

She said she sometimes wishes he would take a break from his career but knows "it's what feeds him."

"He loves doing 'Jeopardy!' He has his own family over there," Jean Trebek said. "They're such a close-knit, beautiful group of people, so I think that gives him a lot of support, a sense of purpose, that he's just not in bed."

Yet Alex said one of the most powerful influences on his positive outlook is his fans.

The host said his original intention for telling the world about his diagnosis was to get "ahead of the tabloids" but he had no idea his announcement would have such an impact on people around the world.

"Most of us have open-ended lives. We don't know when we're going to die. Because of the cancer diagnosis, it's no longer an open-ended life, it's a closed-end life because of the terrible statistics, survival rates for pancreatic cancer," he said. "And because of that, and something else that is operating here, people all over America and abroad have decided they want to let me know now, while I'm alive, about the impact that I've been having on their existence ... They have come out and they have told me. And, my gosh, it makes me feel so good."
Report a correction or typo
Related topics:
arts & entertainmentpancreatic canceralex trebekcanceramerican cancer societyjeopardy
Copyright © 2021 KTRK-TV. All Rights Reserved.
TOP STORIES
Amazon van thieves stopped by grandfather who lost granddaughter
Driver who hit deaf woman ran off covered in blood, HPD says
All migrants are gone from Del Rio border camp, officials say
3 CDC studies fuel universal masking guidance for schools
Another cool day, but change is coming
'The View' hosts test positive for COVID moments before VP interview
'The Wire' actor Michael K. Williams died of overdose, autopsy finds
Show More
COVID-19 cases among students and staff drop 35% in area schools
11-year-old boy knocks on doors to alert neighbors of massive fire
Trump calls for election audit legislation in Texas
Biden urges booster shots following CDC endorsement
Gabby Petito case shining light on victims protecting their abusers
More TOP STORIES News