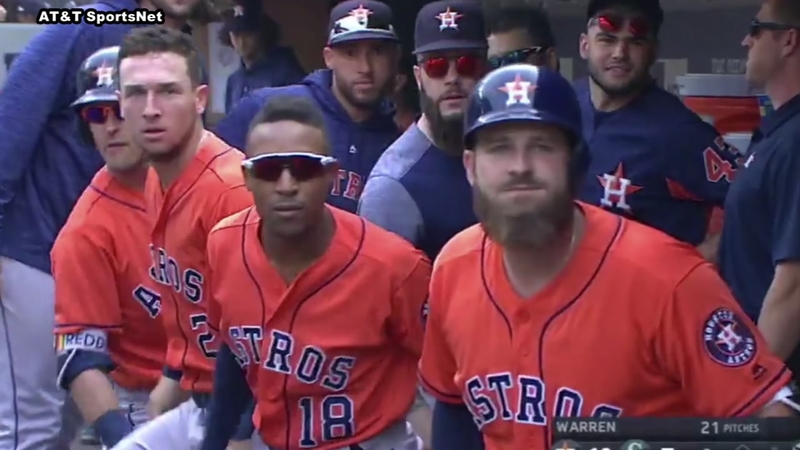 SEATTLE, Washington (KTRK) -- What you lookin' at?

Between hugs for home runs and Fortnite celebrations in the outfield, the Houston Astros have become a fun team to watch in the Majors this year.

The defending World Series champs have a relentless starting rotation and a batting order that can go off during any game.

The latter was the case in Seattle on Wednesday afternoon when the 'Stros exploded for seven runs in just the first four innings of their 10-7 win vs. the Mariners.

Houston added more runs later in the game. The last of them was a solo home run by Tyler White.

Alex Bregman has given the Astros a new tradition recently when he hits homers. He'll return to the dugout, get his high-fives, locate the nearest camera and give an intense stare into it. He knows you're looking, folks.

So far, Bregman has done his version of "Blue Steel" 24 times, which is the same number of home runs he has entering Wednesday.

In a humorous show of team unity, the Astros dugout celebrated White's round-tripper in a well-timed, well-coordinated turn to the camera.

This shot has since captured the imagination of the internet.

When someone mentions crab legs..... pic.twitter.com/WLjormne2l

I hope to broadcast for many more years but I’m not sure too many teams will make me smile as often as these ⁦@astros⁩ #NeverSettle #BaseballIsFUN pic.twitter.com/8jvq7Qq35E

When A’s fans say they are sneaking up on the Astros. https://t.co/Q6rIoUhx8a