With hugs, tears and the ringing of church bells, the new Smithsonian National Museum of African American History and Culture opened its doors Saturday to help this nation understand, reconcile and celebrate African-Americans' often-ignored contributions toward making this country what it is today.

President Barack Obama, the nation's first black president, wiped away a tear as he formally opened the Smithsonian's 19th museum with an impassioned 31-minute speech on the National Mall. His audience included two former presidents, leaders from all branches of the federal government, and first lady Michelle Obama, whose lineage has been traced back to slaves in the South. She too shed a tear as her husband spoke.

Obama noted one artifact in the museum: a stone marker from a slave block where Andrew Jackson and Henry Clay spoke in 1830. This item, Obama said, chronicles not just the fact that two powerful men spoke, but also that multitudes of slaves were "bought and sold, and bid like cattle."

"This national museum helps to tell a richer and fuller story of who we are," Obama said. "It helps us better understand the lives, yes, of the president, but also the slave. The industrialist, but also the porter; the keeper of the status quo, but also of the activist seeking to overthrow that status quo; the teacher or the cook, alongside the statesman. And by knowing this other story, we better understand ourselves and each other." 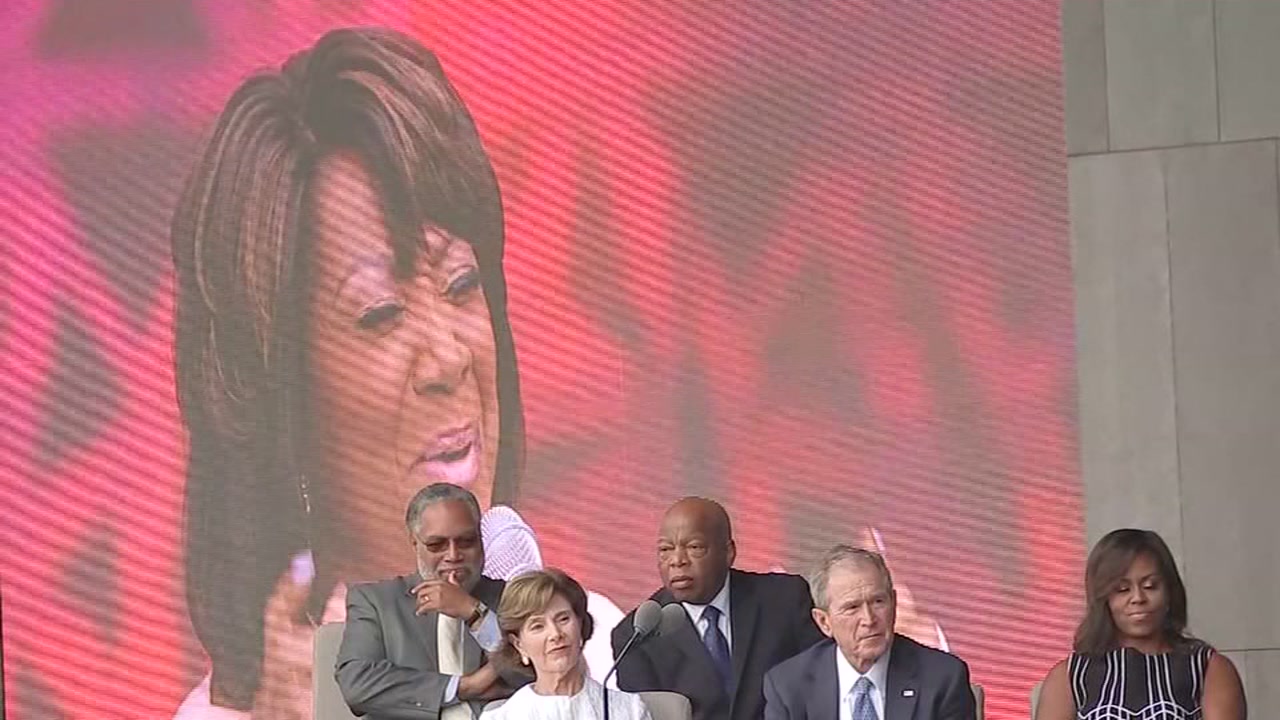 Ground for the $540 million museum was broken in 2012 on a five-acre tract near the Washington Monument, and construction was completed earlier this year. Millions of donors, known and unknown, contributed $315 million in private funds ahead of the opening.

"It's like walking across the desert and finally getting to a fountain of water to quench your thirst. It's absolutely breathtaking for me," said Verna Eggleston, 61, of New York City.

The names of some big donors are on prominent spaces inside: the Oprah Winfrey Theater; the Michael Jordan Hall: Game Changers; and the Robert F. Smith Explore Your Family History Center, named for the CEO of investment firm Vista Equity Partners after a $20 million gift announced Monday.

With exhibits ranging from the glass-topped casket used to bury lynching victim Emmett Till to a fedora owned by late pop superstar Michael Jackson, the museum helps to complete the American tale by incorporating highs and lows, triumph and trauma experienced by black Americans since the first African slaves arrived on this continent almost 400 years ago.

"We're not a burden on America, or a stain on America, or an object of pity or charity for America. We're America," Obama said. "And that's what this museum explains, the fact that our stories have shaped every corner of our culture."

Obama was joined on stage by his predecessor, former President George W. Bush, who in 2003 signed legislation establishing the museum, and John Lewis, a veteran civil rights activist and longtime Democratic congressman from Georgia who co-sponsored the bill.

Bush, accompanied by his wife, Laura, said the museum tells the unvarnished truth, that a country founded on the promise of liberty once held millions of people in chains.

"A great nation does not hide its history," Bush said. "It faces its flaws and corrects them."

Lewis, who is featured in the museum, said he could feel the weight of history around the museum, with slave voices whispering of escape and church choirs singing of freedom.

"All their voices, roaming for centuries, have finally found their home here, in this great monument to our pain, our suffering and our victory," Lewis said. After the speech, Obama hugged the congressman as he returned to his seat.

"I'm just elated and can't express how much joy and gratitude I have to be here today and witness history," said Master Sgt. Donald Sparks of Houston, who just finished a yearlong deployment in Iraq.

The honor of helping Obama open the doors went to Ruth Bonner, 99, daughter of a Mississippi slave who escaped to freedom. The president and first lady joined Bonner and her family in ringing a bell from the historic First Baptist Church of Williamsburg, Virginia, to signal that the museum was officially open.

The church, believed to be among the first Baptist churches organized entirely by black people, acquired its Freedom Bell in 1886. It will be returned to the church for its 240th anniversary later this year.

The 400,000-square-foot museum, designed by British-Ghanaian architect David Adjaye, strikes a unique shape on the Mall with its three-tiered bronze exterior panels inspired by an African wooden column. The exterior tiles are inspired by 19th century ironwork created by slaves in the South, and allow sunlight into the museum through patterned openings.

The museum's opening "finally marks the place and time where we're finally recognized ... and it's about time," said Shenise Foster of Alexandria, Virginia.

Houstonians, public and private, featured in opening of National Museum of African American History and Culture