Houstonians, public and private, featured in opening of National Museum of African American History and Culture 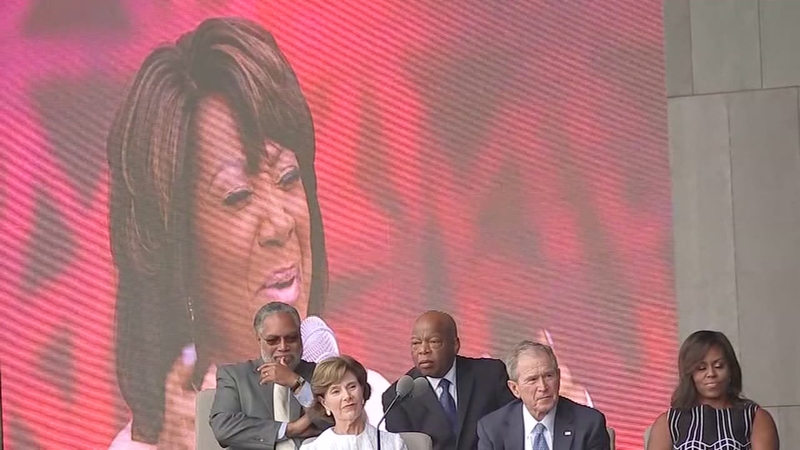 HOUSTON (KTRK) -- Houstonians, both well known and others a bit more behind the scenes, will be featured in the new National Museum of African American History and Culture when it opens in Washington, D.C. on Saturday.

A Houston resident, Alison Leland has been a part of the making of the NMAAHC since her late husband, Congressman Mickey Leland began work on it in the 1980's.

ABC13's Melanie Lawson reports from the opening of the National Museum of African American History & Culture.

"It makes me very proud that after all these years following his death that his legacy lives on and that ideas and seeds that he planted are now coming to fruition in a really spectacular way," said Leland.

Floyd Newsum got to see the new museum last weekend, with one of his paintings hanging inside. He's one of two Houston artists featured. The other is his friend and mentor, the late muralist and Houstonian, John Biggers.

"To be a part of that group, to know that not only the nation will see my work, but the world -- the Smithsonian draws the world," Newsum said.

The museum will also include better known Houstonians like the first black female astronaut Mae Jemison and prima ballerina Lauren Anderson. Making history in 1991 as the first black dancer in a major company, Anderson's pointe shoes will be featured in the museum.

"America's treasures are in the Smithsonian and now there's a whole museum dedicated to African American history and culture -- and I'm part of that," said Anderson. "There aren't words to say how I really feel."

University of Houston graduate and Olympic runner Carl Lewis broke world records, winning 10 medals, nine of them gold. One of those medals is buried with his father but the rest are all going to NMAAHC.

For years, Lewis said he kept the medals in a safety deposit box, "Why should I worry about that when I can leave them somewhere that everyone can see them all the time," said Lewis.

Now, the medals will be on display with some 160 other items from his monumental career.

Still, not everyone in the new museum is a household name.

Nearly 40,000 artifacts came from people around the country. The museum's curators traveled to find treasures to help paint the portrait of black America.

"It just highlighted what we've always known -- he's a great architect and a great person and I'm so glad to share that with the world," said Chase.

Long time art collectors, Anita Smith and her husband Gerald given a $1 million gift along with two paintings from the late artist John Biggers to the museum, sharing his work with the nation.

"If God gives you the means, it's important to keep this dream going," Anita Smith said.

For the Houstonian, the NMAAHC is about a lot more than art -- or even race.