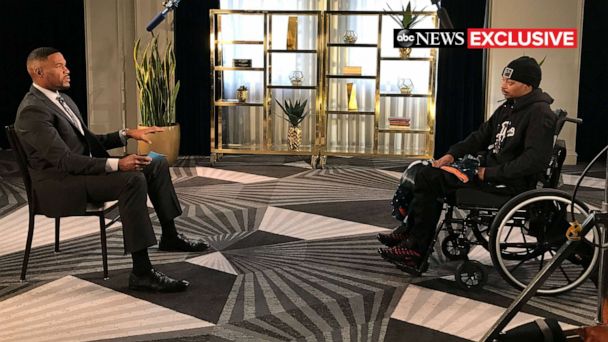 Jacob Blake, a 29-year-old father, said he "kinda went limp" when he was shot seven times by a Wisconsin police officer and was left partially paralyzed.


"All I remember at that point was kinda leanin' back, lookin' at my boys," Blake told "Good Morning America" co-anchor Michael Strahan in an exclusive interview. "I said, 'Daddy, love you no matter what.' It was the last thing I said to them at that point."

"I thought it was gonna be the last thing I say to them," added Blake. "Thank God it wasn't."

Kenosha CountyDistrict Attorney Mike Graveleyannounced last week that no police officers will be charged in the shooting.

Graveley said Kenosha police officer Rusten Sheskey, who is white, was justified in his use of force because Blake, who is Black, was armed with a knife, refused orders to drop it and made a motion as if he was going to stab Sheskey.

Graveley also said Blake admitted to investigators that he was armed with a knife throughout the entire encounter.

Graveley said Sheskey stopped shooting when he saw Blake was no longer a threat and immediately started giving first aid. Graveley said there were 10 bullets left in Sheskey's gun.

Sheskey was placed on administrative leave.