7 homicides erupt across Houston in less than 24 hours 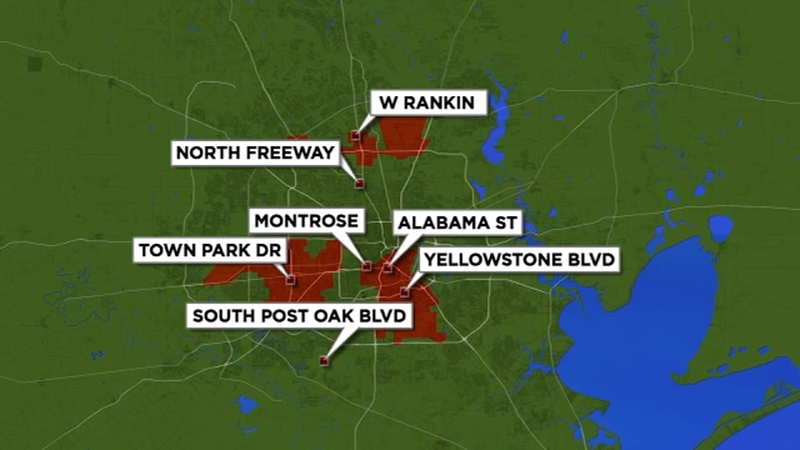 7 homicides erupt across Houston in less than 24 hours

HOUSTON, Texas (KTRK) -- A violent 24 hours across the Houston area involved several different shootings that left seven people dead. Here's what we know about each investigation so far.

A warehouse owner in southwest Houston opened fire at a person trying to rob him late Sunday night. According to Houston police, the owner was assaulted by a robbery suspect armed with a metal pipe and gun at around 11:45 p.m. in the 14000 block of South Post Oak Boulevard.

The 29-year-old business owner shot the robber multiple times, killing the suspect, police said. The victim suffered injuries to his arm and head.

Harris County prosecutors are expected to present the case to a grand jury.

Houston police are investigating the fatal shooting of a man found dead on a sidewalk at 4200 Montrose Boulevard at about 6:40 a.m. There's no known suspect in the case.

The man was found just before the start of the school day at Collins Elementary. Investigators believe the death is unrelated to the campus.

Detectives said the victim was a Hispanic male in his 20s. A passerby reportedly heard gunshots in the area before police discovered the man's body.

Houston police detained a possible suspect after two men were found stabbed in the 5100 block of Yellowstone Blvd., near MLK Blvd., at about 8 a.m. One of the victims died. There's no word on any motive in the case.

Houston police said a man, who was known for hanging around the area, was shot to death in front of a food store Monday afternoon.

Commander for HPD's South Central Patrol Caroleta Johnson told Eyewitness News the man was with a group of people at the time of the shooting.

She said the victim was shot several times. Johnson described the suspect as a man in his 40s who is also known to hang around the area. He was last seen wearing a white shirt with long sleeves and a red and white beanie.

She said he is known to carry a colostomy bag and rides a black bicycle.

An investigation is underway after a Houston police officer was shot and killed in north Houston, according to Houston police. A heavy police presence was seen Monday afternoon outside the motel.

Details about what led to the shooting or if anyone has been detained are unknown. A witness at the scene who heard the gunshots told ABC13 he saw the officer running toward the motel after shots were fired.

Houston police are investigating a deadly shooting in north Houston near Kuykehdahl and W Rankin Road.

According to a tweet posted on the Houston Police Department's Twitter account, a SWAT team along with K-9 units are searching for a man they say shot a woman to death near a business in the area.

READ MORE: Deadly shooting in north Houston is latest in string of homicides