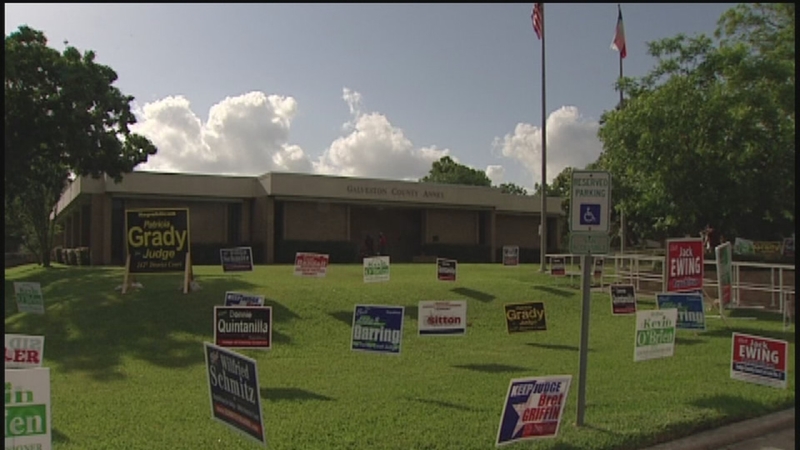 "I'm getting reports and it's in more than one polling location," said Bill Sargent, chief Deputy County Clerk for Elections in Galveston County. "I'm hearing that people have been telling people to vote in a particular race. Poll workers are telling me that people are coming in the door and looking at one specific race. And the ballot is supposed to be secret."

The specific race is Republican primary runoff for the 212th District Court, where attorney Patricia Grady is vying for the judge's seat against incumbent Bret Griffin, who was appointed to the seat in January by Gov. Rick Perry.

The most high-profile controversy involves well-known attorney Tony Buzbee, a backer of Griffin. Buzbee, as well as multiple members of his firm, have given thousands of dollars to the Griffin campaign, records show.

Grady believes that Buzbee improperly encouraged clients who he represents in a suit against BP concerning chemical emissions at its former Texas City refinery to vote for Griffin. She wants an investigation.

"I had heard there was misinformation given about me and my record and if I were elected as judge I would rule against some of the litigants in this case," Grady said. "As a judge I will be fair and independent. I won't be beholden to any special interest group and I'll make sure that whoever comes into the court gets a fair shot."

Buzbee told ABC-13 he did nothing illegal.

At issue for the Galveston County elections office is that if electioneering occurred, did it take place within 100 feet of a polling place in violation of election law.

Buzbee's meeting with his clients took place in the Charles T. Doyle Convention Center in Texas City - which is connected by a single hallway to the Nessler Civic Center, where a polling place is located.

"We've heard there was a group meeting in a building in which a polling location was located in which they were telling their clients they should go and vote for a particular candidate," Sargent said. "I don't know whether that happened. If it did happen, it's illegal in my perspective."

Grady opponent Griffin told ABC-13 that he was unaware of any concerns over the Buzbee meeting until he heard about it through word-of-mouth earlier this week.

Buzbee said that the accusations are unfounded.

"Encouraging clients to vote isn't much of a story," he told ABC-13 by email. "Ms. Grady is losing the election and is desperate. She tried to get appointed by Governor Perry and failed. She then came to me for help and my endorsement and I turned her down. There really isn't anything more to it than that."

Buzbee said that he encourages all his clients to vote "and will continue to do so."

While the buildings are technically connected, they "have separate entrances on separate streets," Buzbee attorney Chris Leavitt said. "From just looking at the buildings, they appear to be separate buildings."

Leavitt also said that it is unlikely that either Grady or Griffin could make any rulings in the BP case anyhow because of conflicts both have in the case.

"The accusation or the suggestion that one candidate is better than the other for this particular case in nonsense," he said. "More than likely, neither will be able to rule on it."

Buzbee's encouragement may have helped: In the wake of Buzbee's Monday meeting, officials said there was a surge of voting at the Nessler Civic Center polling place.

More than 1,000 people voted at the Nessler Center in the days following the meeting, records show. More than half who vote did not vote in the Republican primary, an analysis shows. More than 300 have no recent voting history.

Whether election law has been violated is up to the Galveston County District Attorney to decide. Sargent sent a memo to the DA, he said.

First Assistant District Attorney Donna Cameron declined to comment on whether the office is investigating or not.

There have been other incidents, too, Sargent said, including one person who entered a polling place claiming they were an attorney for the Buzbee law firm and said they wanted to instruct their clients how to vote.

"A person came in and said they were an attorney, they were representing these two people, they were going to tell these people how to vote in the polling location," Sargent said.

Sargent said he did not know who the individual was or if he was connected to Buzbee's firm or not. He said it does not matter which campaign offenders might be linked to, offenders deserve punishment.

"If somebody wants to tell someone how to vote outside of the 100 foot limit, that's up to them, but don't mess with my polling locations. Period," Sargent said. "If I catch you doing that I'm going to the DA and we're going to hang you out to dry."

Friday marks the last day of early voting in the runoff.

Runoff Election Day is May 27.