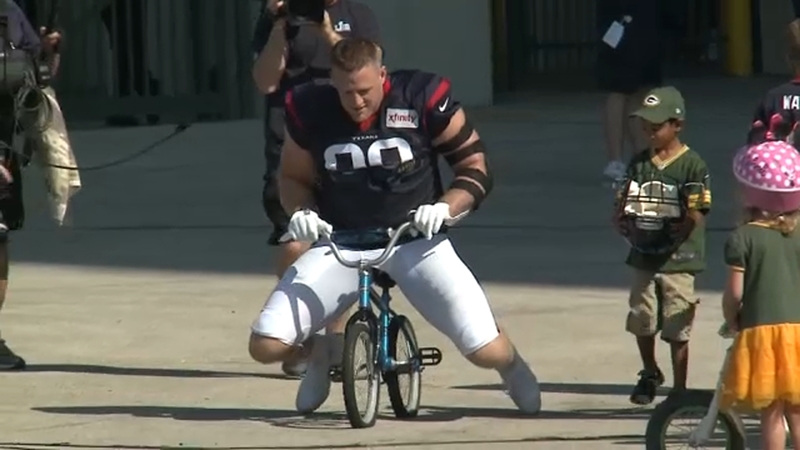 GREEN BAY, Wisconsin (KTRK) -- J.J. Watt finally got to fulfill a dream that he had growing up in Wisconsin and rooting for the Green Bay Packers.

That dream didn't go as planned.

The star defensive end and the Houston Texans got the opportunity to ride to their joint practice with the Packers on Monday using bicycles belonging to local kids.

The Packers have been riding on this tradition for 60 years, although there is no solid origin story to it.

The excited Watt got to begin his ride on the seat of a little boy's bike. But, unfortunately, Watt weighs close to 300 pounds.

"It was pretty awesome until I broke the bike," Watt admitted to reporters. "The bike I was using wasn't equipped for a 290-pound man and the seat broke off."

The Pewaukee, Wisconsin-born Watt said he made sure a replacement bike was bought for the child and he apologized for the folly.

In Houston Texans social media postings, Watt is seen carrying the bicycle that was so small on him, it looked like he was carrying a book bag.

Watt rode on with another bicycle, one a little more suited to his size.

For preseason, the Packers typically invite area kids to roll up to the practice facility on bicycles. The players will then use the bikes to head to the practice field from the locker rooms with the kids in tow. The Texans requested to be part of the tradition ahead of Monday.

For Texans star J.J. Watt, who grew up in Wisconsin, this week in Green Bay fulfills a childhood dream when he was rooting for the Packers, even if things don't go according to plan.

The Houston Texans players rode to joint practice in Green Bay as part of a long-standing Packers tradition.

Fans have been lining up since 11 p.m. to see J.J. Watt, DeAndre Hopkins and company before the 2019 season starts.

The Houston Texans announce six training camp session that are open to the public before the 2019 season.