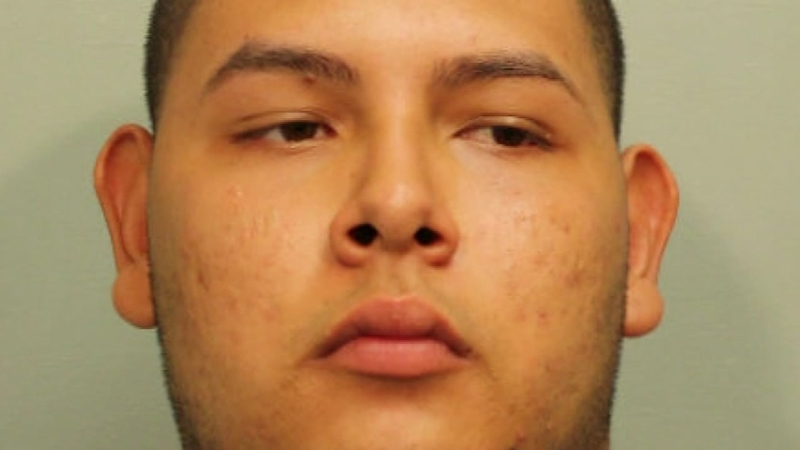 HOUSTON, Texas (KTRK) -- The man wanted for murdering a father who came to the aid of a shooting victim is a "Dreamer" with violent felons for a father and brother.

Judas Deluna, 21, is on the run, and accused of killing a father and husband as he just tried to help. De Luna is charged with felony murder in the shooting death of Rahman Rupani, 30.

The shooting happened outside DJ's Food Mart in northwest Harris County on Jan. 26.

Investigators believe Deluna got into a fight with a man in the parking lot and retrieved a gun from his vehicle. He then returned to shoot him. Rupani, whose father owns the store, was inside. He came to the shooting victim's aid and was shot, too. Rupani had two young children and a wife.

After three weeks on the run, Eyewitness News has learned Deluna is in the United States under the Deferred Action for Childhood Arrivals (DACA) program. He is undocumented, a so-called Dreamer.

Family of the man shot and killed outside of a northwest Houston store speaks out.

"This is not a depiction of who Dreamers are, who DACA holders are," Cesar Espinosa, an immigrant rights activist with FIEL Houston said. "We, like everyone else, don't want those people here. Don't want bad actors in our community."

Espinosa emphasizes among Dreamers, Deluna is the exception, not the rule.

"Studies have shown immigrants are less likely to commit crimes than born citizens because even if you make a small mistake it could lead to something as big as a deportation for ourselves," Espinosa added.

Nearing deportation, again, is where Deluna's father, Manuel Deluna, is. He is on "hold' status with Immigration and Customs Enforcement since his release from prison last October.

According to Robert Hurst with Texas Department of Criminal Justice, he served four months of a two-year sentence stemming from a SWAT standoff in November 2016. He barricaded himself after assaulting his wife and daughter.

Five years earlier, Manuel Deluna's other son, Eric Deluna, planned an ambush on an 18-wheeler full of drugs. It was part of a notorious federal sting that went bad aimed at the Los Zetas cartel. A federal informant died in a shootout that also left a Harris county sheriff's deputy wounded.

Anyone with information on Judas Deluna is asked to contact Crime Stoppers. It could yield a cash reward.
Report a correction or typo
Related topics:
houstonmurderdeadly shootingdaca
Copyright © 2021 KTRK-TV. All Rights Reserved.
More Videos
From CNN Newsource affiliates
TOP STORIES