Georgia could be key Trump vs. Biden race for president
KTRK 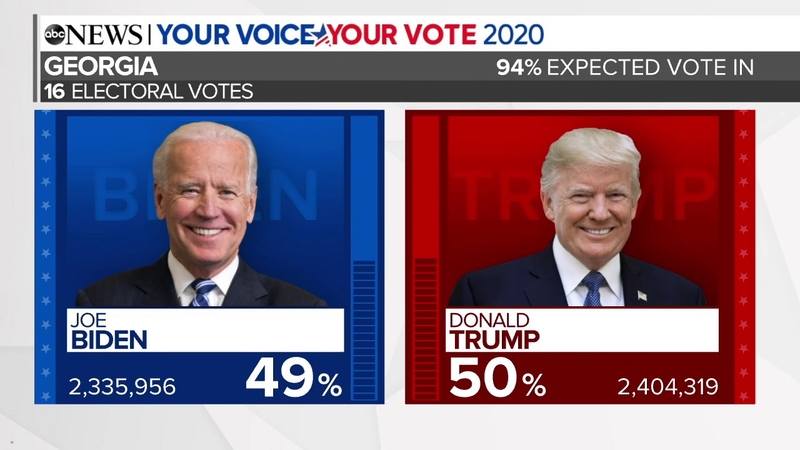 Too early to call presidential race in Georgia

GWINNETT COUNTY, Georgia -- President Donald Trump and Joe Biden are locked in a tight contest to secure the 270 electoral votes needed to win the presidency. Early Wednesday, Trump prematurely claimed he carried Georgia - and several other states that were too early to call.

Late Wednesday night, the vote margin had tightened, with Trump now leading by 28,827 votes. Trump has 49.7% of the vote to Biden's 49.1%, still at 95% of the expected vote reporting. Approximately 91,000 ballots were still outstanding as of 10:15 p.m. ET, making the race is too early to call. The outstanding ballots include mailed ballots from population-dense counties in the Atlanta metro region that lean Democratic. Biden is overperforming Hillary Clinton's 2016 showing in those counties, including in their more upscale suburban reaches.

The battleground state hasn't gone for a Democratic presidential candidate since 1992.

In an early morning appearance at the White House, Trump said he planned to contest the U.S. presidential election before the Supreme Court. It was unclear exactly what legal action he might pursue.

Trump's campaign and the Georgia Republican Party have filed a lawsuit against the Chatham County Board of Elections asking a judge to order the county to secure and account for ballots received after 7 p.m. on Election Day.

State party Chairman David Shafer said in a statement Wednesday night that they planned to sue in a dozen counties.

Gwinnett County experienced a technical issue delayed the count, and a burst pipe at State Farm Arena in Fulton County in Atlanta delayed the processing process there. It had already exceeded the total turnout seen for the 2016 general election before Election Day even arrived.

County officials released a report Saturday morning that showed 332,538 ballots had been accepted by elections officials as of the end of Friday. That includes both in-person early voters and people who cast absentee ballots that had been processed and accepted.

By comparison, 332,149 ballots were cast in the 2016 general election, according to the summary from that election.

When will we know who wins the 2020 election and becomes the next president? It could take days or weeks, depending on how quickly ballots are being counted in a few key battleground states, like Wisconsin and Pennsylvania.

Gwinnett County reported it was already at a 57% turnout for Tuesday's election following the end of early voting.
That number shouldn't be too surprising. The biggest story about voting so far for the Nov. 3 election, according to Georgia Gwinnett College political science professor Matthew Gunning, has been the turnout.

"(It's) the volume," Gunning said. "We're just simply seeing way more people early vote than in the past. And, in some states, there's a tendency of Democrats to early vote more than Republicans, but in Georgia, we're seeing (a lot of) early voting in both heavily Republican counties and in heavily Democratic counties."

Gwinnett County officials have said there is a delay in getting absentee ballots processed and accepted into the system after they are received because of the volume of mail-in votes coming in. At point during early voting, the delay was about five days.

Fair Fight founder Stacey Abrams, who was the Democratic Party's nominee for governor in 2018, said vigilance is needed to ensure all voters have a chance to cast their ballot and have their voices heard, but she also offered praise for Gwinnett County elections officials in terms of how she felt they handled early voting.

"I think Gwinnett has done a very solid job of responding to the volume of voters that we've had and I commend the good work that's being done," Abrams said. "But, we need to continue to keep our eyes peeled because as we head closer and closer to election day, Gwinnett will once again be a bellwether of what's going to happen in this state."

Gunning said another key aspect of the voter turnout seen far for the general election is the number of people casting ballots in 2020 who did not cast a ballot in 2016. That ratio equated to roughly one in four voters being people who did not vote four years ago, he said.

These voters are younger and "a little bit more non-white," according to Gunning.

"Those are politically consequential patterns," Gunning said. "We know that age has been strongly related to party in that, and this goes back about 10 years now, older voters tend to more Republican voting and younger people tend to lean more Democratic.

"And, we know that race is also correlated with votes, especially in a state like Georgia. I can't tell you how these new voters are voting, but I can tell you is that based on their demographics, the Democratic Party will probably be more pleased about this than the Republican Party."

Georgia, long a GOP stronghold, hasn't voted for a Democratic presidential candidate since the 1990s, but parts of the state are leaning Democratic. Trump easily won the state by 5 percentage points in 2016, but Biden maintains he has a shot and made campaign stops in Georgia during the final week of the campaign.

The GOP grip on Georgia is loosening as the number of older, white, Republican-leaning voters die. They are being replaced by younger people - some having moved to fast-growing Atlanta from other states - who vote Democratic.

Thirty-five U.S. Senate seats are on the ballot Tuesday, which will determine control of the legislative chamber for the next two years.

But due to election law quirks in the states of Georgia, where two seats are up for grabs, it is possible that the fate of the current 53-47 Republican majority will remain unknown for weeks to come.

One already is headed to a Jan. 5 runoff after no candidate reached the 50% threshold to win. GOP Sen. Kelly Loeffler will face Democrat Raphael Warnock in a special election for the seat Loeffler was tapped to fill for retired Sen. Johnny Isakson.
In the other, GOP Sen. David Perdue, the former business executive Trump calls his favorite senator, tried to stave off Democrat Jon Ossoff, another candidate who has benefited from the "green wave" of campaign donations. It too, is expected to go to a runoff.

Georgia requires a Senate candidate to capture over 50 percent of the vote in order to win outright on Nov. 3. If not, the top two vote-getters move on to a runoff election, which Louisiana will hold Dec. 5 and Georgia has scheduled for Jan. 5.