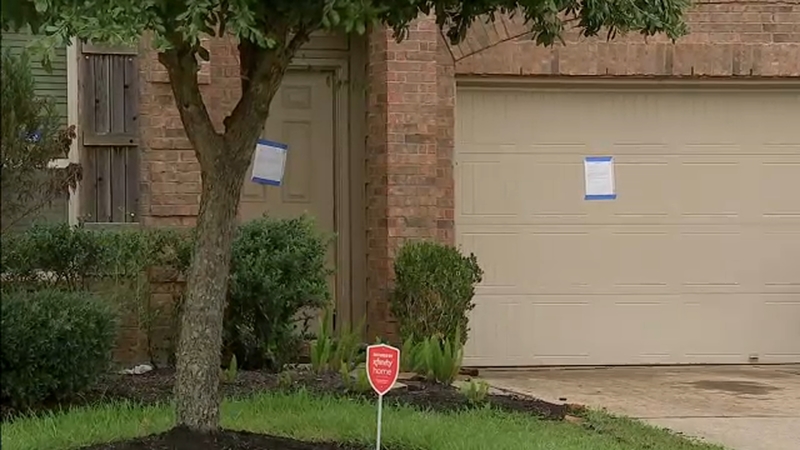 At least 35 people were living inside a two story home in the 14000 block of Long Meadow Drive.

ABC13 has also learned from deputies that over the past several months, they've responded to two deaths at the home. Eyewitness News is waiting to get more information on that.

Images captured inside of the home showed rows of mattresses inside of a garage that has no AC.

Deputies said the home was infested with cockroaches, had little food, no medication and was operating with just one functioning restroom for at least 35 people. The group home is called the Caring Hands Group Homes.

"I would have never in a million years guessed that, that was going on four houses down from me," said neighbor Ivana Moore.

Neighbors said that they saw people coming and going, but never imagined this was happening behind closed doors.

A majority of the residents that were at the home had mental and health issues or physical disabilities.

"You have people that are suffering from extreme disability and mental health issues. A lot of them didn't know how to communicate what was going on, so they were at a disadvantage," said Harris County Precinct 7 Media Relations Director Pamela Greenwood.

After a welfare check prompted deputies to check the home, they found some people who were not receiving the care they needed, including a triple amputee and another wounded man.

"There was another gentleman who had gaping wounds in his abdomen area," said Greenwood.

So, what can be done to stop group homes like this from operating?

State and county officials said the home did not have a permit to operate.

Plus, the HCFMO can work with the county attorney to get an injunction or emergency restraining order to shut down a home if necessary.

They were actually already looking into this group after receiving a complaint earlier this month.

Then there's the criminal side of things, where the Harris County District Attorney's Office could charge someone with the crime. Right now, the case is still under investigation.

"Right now, we just have to make sure that the case, the facts, the details are investigated early and effectively so we can make an appropriate charging decision in the future," said the Division Chief of Family Criminal Law Division for the Harris County District Attorney's office Mary McFaden. "The type of investigations that were looking at, at least from the facts that are coming out of the media, are more of a neglect situation. So when you look at the law, and what the law says in regards to neglect, then you have to prove certain levels of care and obligation."

As the investigation continues, deputies are just grateful the people that were in awful conditions are now are in better places.

"Adult Protective Services arrived on scene and they managed to get people to better locations that were licensed," said Greenwood.

Some of the residents at the home told deputies that they were referred to the group home by Ben Taub.

Harris Health System, which Ben Taub is a part of, sent the following statement:

Personal care homes and other residential settings are essential resources for individuals with housing insecurity, following a hospital stay. Many local hospitals, mental health providers and local police departments share these community resources with their clients.

Harris Health does not own or operate personal care or residential group homes, and does not have active contracts with these facilities.

Since learning of concerns with this residential facility, Harris Health is reviewing its processes related to discharge planning for individuals who indicate they are housing insecure.

Harris Health supports establishing greater oversight of care homes and other residential group homes to assure the appropriate support for individuals in their residences is safely maintained.