Missing remains are found at home

HOUSTON (KTRK) -- Skeletal remains were carried out of a home in the heights area Saturday night, according to the Houston Fire Department.

A skeleton was found in the attic of a home in the Houston Heights, discovered by the new owner, still moving into the 1930's cottage on Allston Street.

"They were moving boxes into the attic," said the father of one of the new renters. "They noticed a gap in the plywood and looked inside with a flashlight."

He asked that his name not be used.
EMBED More News Videos

The skeleton was in a crawl space, between the boards on the attic floor and the sheet rock on the ceiling.

All that was found was "just bones," said HPD homicide detective Jason Fay. "There was some tattered cloth but not sure it was just scraps drug in by wild animals."

Detectives will attempt to contact previous tenants of the home, but confirm there was a missing persons report filed for 61-year-old Mary Cerruti, a woman who lived at the same address two years ago. 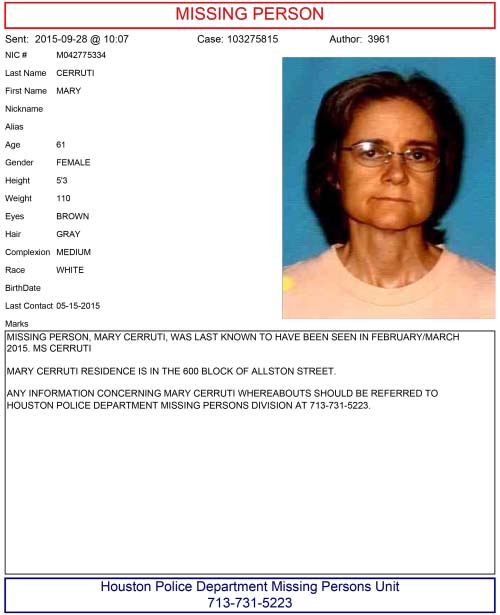 Cerruti's ex-husband, David Cerutti, said they divorced 25 years ago, he was notified when she was reported missing, but hasn't received any news since then.

Cerruti was an only child with a few close family members.

According to a neighbor, Cerruti kept to herself and surrounded herself with several cats. The neighbor said police went inside Cerruti's house and found all of her cats dead, but never found her. The house has sat empty until the new tenants moved in and found these remains.

A forensics exam will attempt to put a name to the remains, and determine how the person died. It is possible it was an accident, or through natural means, such as a health condition. "It could have been someone up in their attic and gone about their business, and unfortunately, the board they were standing on gave out. Nobody knew that they were there, and they had nobody to check on them. "

The skeletal remains, most of which were located, were carried out in several bags, and loaded into a Forensics Center van.

As for the owner, his dad said his son intends to continue moving in. "We'll say a rosary for the person's soul, and everything will be fine," he added.