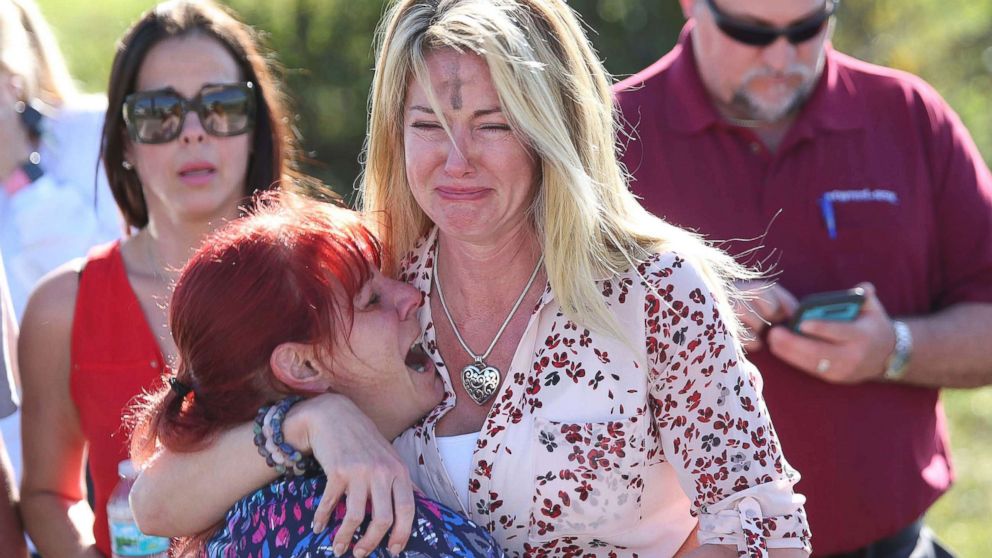 A gunman opened fire at a South Florida high school today, killing 17 people and sending students running for their lives, according to law enforcement officers on the scene.

-- The suspect, 19-year-old Nikolas Cruz, was taken into custody off campus. He slipped out of the school after the shooting by blending in with other students who were trying to escape, according to two law enforcement sources and an eyewitness.


-- Cruz had "countless magazines" and was believed to have an AR-15 rifle, the sheriff said.


-- The sheriff said Cruz had attended the school but was expelled for disciplinary reasons.


Student Michael Katz told ABC News that at the end of the day he "heard what sounded like a garbage truck like banging."

"Then also I hear, 'Boom, boom, boom.' I hear screaming everywhere," he said. "I just got underneath my teacher's desk."

"We had police invade the school, and we were taken out," Katz said. "Fortunately, my father was there to pick me up."

One mother shaking with worry told WPLG her daughter said she was OK, huddled in a locked classroom.

Freshman student Samuel Dykes told the Orlando Sentinel that he was on the third floor of the school when he heard gunshots.

Officers told students to look forward as they evacuated, but Dykes told the newspaper that he saw several bodies in a classroom.

Another mother told the affiliate that her daughter "keeps telling me to stay away. 'Be safe, Mom, stay away.'"

"I won't stay away," she said, telling her daughter, "I'm your mother."

Investigators are probing Cruz's social media accounts for clues, the sheriff said, calling some of the things posted "very disturbing."

"If you see something, say something," Israel said at a news conference earlier today. "If anybody has any indicator that someone's going through a behavioral change, on social media if there are disturbing photos, perhaps bombs or firearms or just videos or pictures that are just not right, please make sure law enforcement knows about it."

Israel said this evening officials were still working to identify the victims. He said a football coach was among the dead.

Pierre Jospitre said he was pulling into his driveway from work when he saw the suspect on the ground with an official on top of him.

Within seconds, several law enforcement officers swarmed the area, Jospitre said, adding that when the suspect was picked up off the ground, he was vomiting and was not walking right.

President Donald Trump tweeted, "My prayers and condolences to the families of the victims of the terrible Florida shooting. No child, teacher or anyone else should ever feel unsafe in an American school."