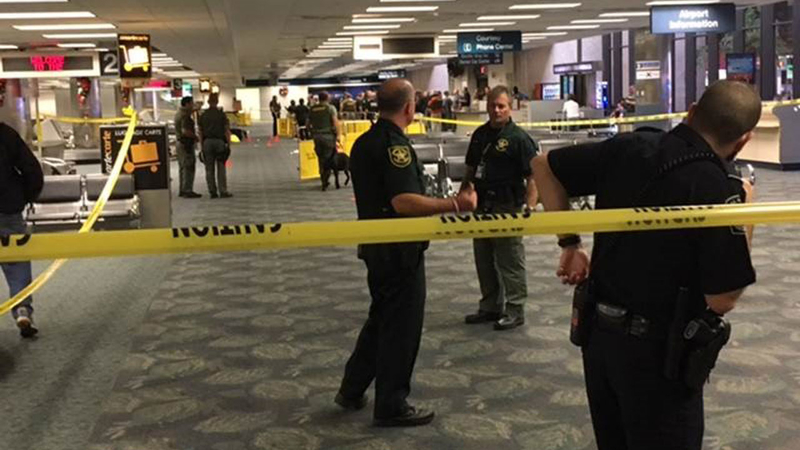 FT. LAUDERDALE, FL (KTRK) -- An arriving airline passenger with a gun in his checked luggage opened fire in the baggage claim area at the Fort Lauderdale airport Friday, killing five people and wounding eight before throwing his weapon down and lying spread-eagle on the ground, authorities and witnesses said.

A county official says the shooter, who ABC News has identified as 26-year-old Esteban Santiago, pulled a gun out of a checked bag, loaded in a bathroom and started shooting. Click here for everything we know about Santiago.

PHOTOS: Chaos after shooting in airport

Chip LaMarca, a Broward County commissioner, was briefed on the airport shooting by Broward Sheriff's office. He told The Associated Press by phone that Santiago was a passenger on a Delta flight and had checked a gun.

It is legal for airline passengers to carry guns and ammunition as long as the firearms are put in a checked bag - not in a carry-on - and are unloaded and locked in a hard-sided container. Guns must be declared to the airline at check-in.

Police say Santiago is the sole suspect in the event. He flew from Anchorage, Alaska, to Minneapolis, Minnesota, before landing in Fort Lauderdale.

This photo shows the suspected shooter being led away by law enforcement, according to the eyewitness to the shooting who took the photo.

Santiago was not harmed when he was taken into custody, and investigators are currently interviewing him.

Authorities gave no details on a possible motive for the shooting inside Terminal 2, which serves Delta Air Lines and Air Canada.

"This could well be someone who is mentally deranged, or in fact it could be someone who had a much more sinister motive that we have to worry about every day, and that is terrorism. We can't conclude that," said Florida Sen. Bill Nelson.

According to the Broward County Sheriff's Office, the shooting occurred outside of the terminal's security perimeter. Passengers have reported hearing gunfire in the terminal's baggage claim area.

Video posted on Instagram appeared to show several people wounded in the baggage claim area of the terminal. One person appeared to be lying in a pool of blood with a head wound.

Operations at the airport have been suspended, and flights are being diverted to neighboring airports. The FAA has implemented a ground stop for all domestic flights destined for the airport; they are currently being held on the tarmac at their origin.

ABC13's Steve Campion was on board plane that landed just after shooting in Ft. Lauderdale. This is what passengers were told.

Both Houston airports have taken steps to increase security, although airport officials say "those steps will likely not be noticeable to members of the traveling public and are not expected to impact operations in any way."

News helicopters hovering over the scene showed hundreds of people standing on the tarmac early Friday afternoon as an ambulance drove by and numerous law enforcement officers rushed to the scene.

Former White House spokesman Ari Fleischer tweeted that he was at the airport when shots were fired and "everyone is running."