Messi leads Argentina over US 4-0, into Copa America final 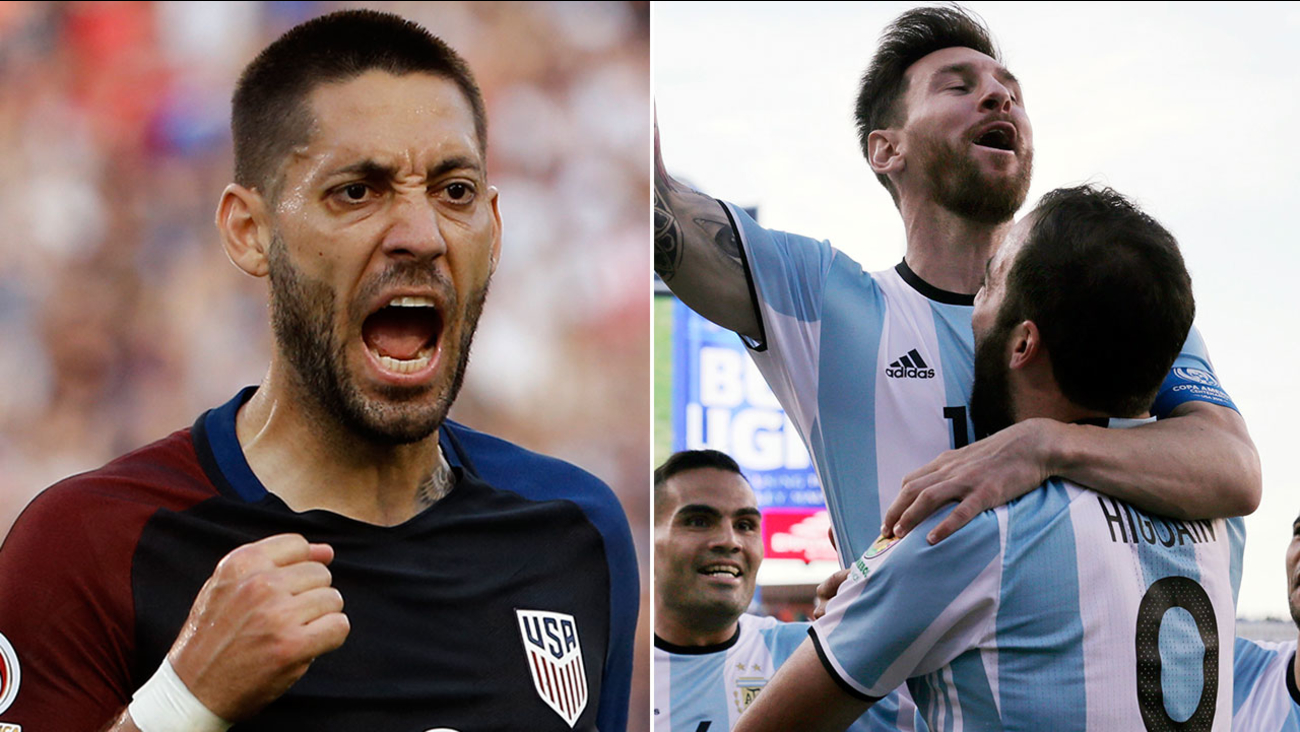 HOUSTON -- Lionel Messi was too much for the United States to contain.

The five-time world player of the year set up Ezequiel Lavezzi's opening goal in the third minute, then scored on a free kick to break Argentina's career scoring record and assisted on the final goal in a 4-0 rout of the U.S. on Tuesday night that put the La Albiceleste into the Copa America final.

"This was the goal when we got here, to play another final and we made it," Messi said. "We've been spectacular from day one and we deserved this."

After Messi doubled the lead in the 32nd minute with his 55th international goal, his tournament-leading fifth, Gonzalo Higuain quickly ended U.S. comeback hopes when he put the rebound of his initial shot past goalkeeper Brad Guzan in the 50th. Higuain scored off a Messi pass in the 86th.

Argentina will seek its first major title since the 1993 Copa - and its first since Messi's debut in 2005 - when it plays Chile or Colombia on Sunday in East Rutherford, New Jersey.

"That's what we hope and what we want, to finally achieve that," Messi said. "We deserve it, for all the good work we've been doing all these years."

It might be missing Lavezzi, who fell backward over an advertising sign board and appeared to land hard on his left arm at about the 60th minute. Lavezzi was able to get up several minutes later and left on a cart. 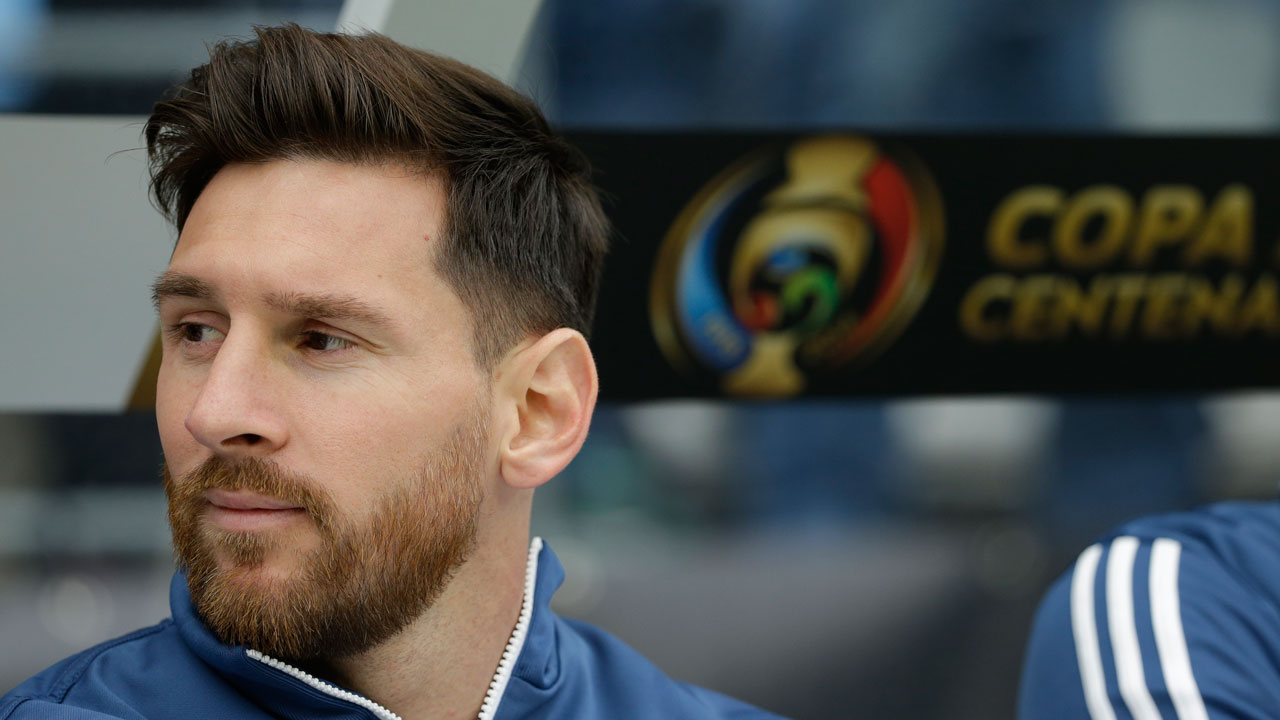 Fast facts on Lionel Messi
Lionel Andrés "Leo" Messi is an Argentine professional footballer who plays as a forward for Spanish club Barcelona and the Argentina national team. But that's not all there is to know about him.

Hosting a special, expanded 16-nation edition of South America's championship to celebrate Copa America's 100th anniversary, the U.S. won a difficult group that included third-ranked Colombia and then beat No. 13 Ecuador in the quarterfinals. But top-ranked Argentina and Messi, who turns 29 Friday and is at the top of his game, outclassed the U.S. from the opening whistle and stunned the sellout crowd of 70,858 at NRG Stadium.

Messi has helped Barcelona win eight titles in Spain's La Liga and four in the Champions League, but his Argentina trophies have been limited to the 2005 FIFA World Youth Championship for players under 20 and the gold medal in the 2008 Olympics, mostly for players under 23. La Albiceleste lost to Germany in the 2014 World Cup final and to Chile in last year's Copa America final.

The U.S. and coach Jurgen Klinsmann were trying to rebound after getting eliminated by Jamaica in the semifinals of last year's CONCACAF Gold Cup, losing to Mexico in a playoff for a 2017 Confederations Cup berth and struggling in the semifinal round of 2018 World Cup qualifying. The Americans close the tournament Saturday in the third-place match at Glendale, Arizona.

Klinsmann inserted midfielders Kyle Beckerman and Graham Zusi into his lineup along with forward Chris Wondolowski because of suspensions assessed to midfielders Jermaine Jones and Alejandro Bedoya, and forward Bobby Wood. In an effort to spark offense, 17-year-old Christian Pulisic entered at the start of the second half, and Steve Birnbaum came on in the 60th for Beckerman, allowing Geoff Cameron to move up to midfield, and Darlington Nagbe replaced Clint Dempsey in the 78th.

5 things to know about Clint Dempsey
The USA soccer team is relying on Dempsey to lead them to victory.

Argentina went ahead when Lavezzi played a short corner kick to Ever Banega, who passed back to Lavezzi sprinting from the corner diagonally. Lavezzi beat Fabian Johnson to the ball and poked it to Messi about 25 yards out, in the center of the field. As the U.S. defense started to come out, Messi one-timed a flick with his left foot over the back line to Lavezzi, who got to the ball ahead of Kyle Beckerman about 7 yards from the goal. He headed the ball over Guzan, who had started to come off his line.

Messi doubled the lead after Beckerman slipped and Chris Wondolowski took down Messi, earning a yellow card. Klinsmann screamed at Paraguayan referee Eduardo Cardozo as Messi placed the ball about 26 yards out, a few yards closer to the goal than the foul. After the U.S. set up its wall, Messi bent a beautiful curving drive that went just over Guzan's outstretched left palm and into the upper corner.

Messi moved one ahead Gabriel Batistuta's career total, according to the Argentine Football Association. However, FIFA records Batistuta's total as 56, including two goals in an exhibition against Slovakia in June 1995.

Higuain scored when he burst past John Brooks for Lavezzi's pass and one-timed a shot that Guzan stopped with a diving save, then poked the rebound into an open net. Messi nearly added a goal in the 83rd with a 20-yard shot that Guzan palmed to safety.

Notes: The U.S. dropped to 2-9-1 against top-ranked teams. ... A bare-chested male fan ran onto the field as the second half was about to start, and he was tackled by security.