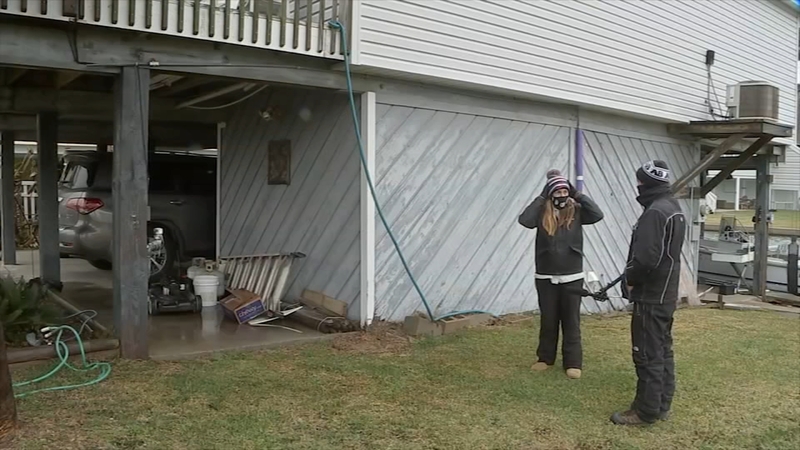 GALVESTON, Texas (KTRK) -- The winter storm of 2021 has become a slow rolling disaster on Galveston Island.

Many residents have been without power for three days, which means they're without water too.

For those on the west end, the only option has been to buy water, but that's impossible with shuttered stores and gas stations.

The closed gas stations also mean fuel tanks are running dry, only adding to the desperation.

Bruce Bradford is like so many other west end residents. His electricity went off Monday and has not come back.

"Me and my wife, we're retirees, and this is where we live," Bradford said. "We're at-risk type people. It's just like everybody's forgotten about it."

Burst water pipes due to the freezing temperatures only add insult to injury. The problem was made worse in homes that are elevated to protect them from flooding and storm surge. Unlike ground-level homes, the raised structures allow air to flow freely underneath where pipes are located. Even water pipes that were winterized fell victim to the brutally cold temperatures this week.

"Especially with the elevation, they don't have the benefit of ground warmth or anything like that, and they're not really well insulated," said resident Shawn Porch.

Porch said she was ready for the winter storm, but after three days, her supplies were running low. Porch just wants someone to let her know if power will be back soon so she can shelter in place, or if she should leave.

Galveston County emergency managers told ABC13 Wednesday they are "beyond frustrated." They said county managers are asking local power providers when the electricity will come back on, but so far, they have not received an answer.

That leaves thousands of island residents in the same situation as their neighbors across southeast Texas and no telling when it will come back on. One county manager told ABC13 that some people reported electricity coming back but then they learned others have lost power. Here on the west end, people do not know what to do and they are running out of supplies.