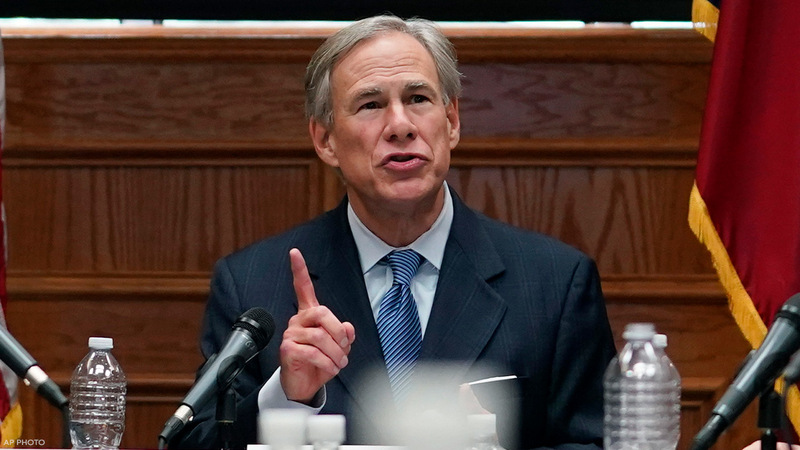 Abbott in state address: Texas on 'comeback' from pandemic

AUSTIN, Texas -- Republican Gov. Greg Abbott on Monday night said Texas is on a comeback from a pandemic that's killed more than 35,000 people statewide, third-most in the U.S., then pivoted America's biggest red state into a thicket of contentious issues that have roiled the nation during the past year.

In his final State of the State address before he is on the ballot for a third term in 2022, Abbott declared calls to "defund the police" an emergency in need of stopping and ordered the GOP majority in the Texas Capitol to prioritize "election integrity" without mentioning there was no evidence of widespread fraud during the 2020 elections.

He also demanded more gun protection on the books at a time when the NRA is newly looking to reincorporate in Texas, and more anti-abortion laws in a state that already has some of the most restrictive measures in the country.

.@govabbott : "Our communities are filled with heroes.
Think of our nurses and doctors, the food servers and hospital janitors. Think of the truck drivers, grocery clerks, small business owners, and so many Texans who labor on the frontlines."

.@GovAbbott : "Hard-working Texans are at the forefront of our agenda this legislative session as we build a healthier, safer, freer, and more prosperous state."

.@GovAbbott "This session we must continue to fund education as we promised. Also, if we expect the next generation of Texans to keep Texas the best state in the nation, we must teach them why we are so exceptional." #txlege

Abbott, who has not ruled out a 2024 presidential run, delivered his State of the State on primetime television in Texas for the first time - rather than in front of lawmakers in the state Capitol, where COVID-19 worries continues to restrict gatherings.

But that gave Abbott an even larger audience than usual to defend his pandemic response - which has come under attack from members of his own party - at a moment when Texas, like most of the U.S., is finally seeing hospitalizations and cases fall after reaching record highs in recent weeks.

.@GovAbbott : "From medicine to education to business, broadband access is not a luxury-it is an essential tool that must be available for all Texans. I am making the expansion of broadband access an emergency item this session." #txlege

.@GovAbbott : "One thing all of us should agree on whether you're a Republican, Democrat, or Independent, is that we must have trust and confidence in the outcome of our elections. That is why Election Integrity will be an emergency item this session." #txlege.

The governor highlighted the achievements of Stacia Brightmon during his speech, a Houstonian who managed to turn her life around over the course of a few years with the help of a training program that the governor supports.

"In just a few years, she went from being homeless to becoming a homeowner," Abbott said. "And when she told me how much she is making, I let her know that she is now earning more than the governor of Texas."

Abbott praised frontline hospital workers for their resilience and declared expanding broadband access a priority in the aftermath of a pandemic that forced millions to work and go to school from home. There was no mention of direct relief for Texans out of work but a demand for legislation that would protect businesses from pandemic-related lawsuits.

Democrats, who are still dusting themselves off from a demoralizing election cycle in which their massive expectations in Texas flamed out up and down the ballot, did not even wait for Abbott's address before blasting his response to the pandemic.

"As the Governor attempts to gloss over the lives that have been lost and the seriousness of the crisis we face, Texans everywhere know things are not right, and they are getting worse," Texas Democratic Party Chairman Gilberto Hinojosa said. "We must demand more out of leaders or we'll never get to a point where every one of us has a fair shot to get ahead."

The State of the State is typically when governors lay out their legislative priorities over the coming year. In Texas, lawmakers meet for only five months every two years, giving legislators only until the end of May to try delivering Abbott's priorities to his desk.

This legislative session in Texas is the first since mass shootings that shook the state before the pandemic, the most deadly of which was a gunman who allegedly confessed to targeting Mexicans when he opened fire at a Walmart, killing 23 people. Abbott formed a task force on domestic terrorism following the attack but did not mention the shooting during his address.