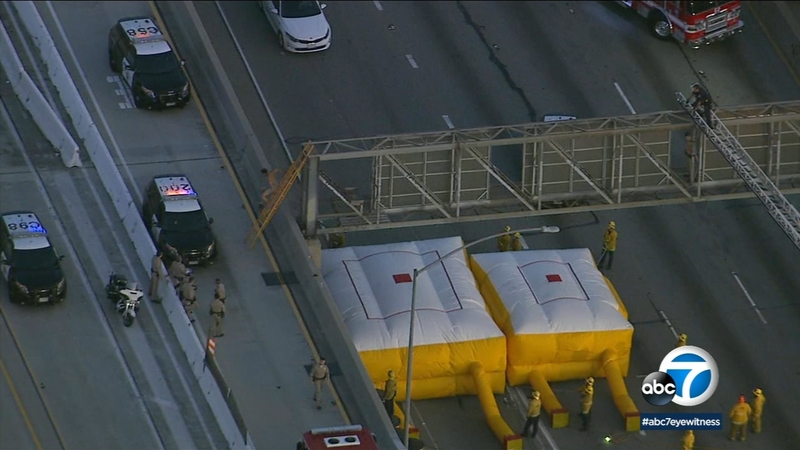 LOS ANGELES, California -- The 101 Freeway reopened and a man was taken into custody several hours after climbing a freeway sign on Thursday.

The incident had halted all traffic shortly before 2:30 p.m., according to Los Angeles Fire Department officials.

#Breaking Thousands of drivers stranded on the 101 frwy near downtown Los Angeles as #CHP tries to talk down a jumper dangling from a sign in Boyle Heights. Airbag cushion deployed #lafd @LAFD pic.twitter.com/y6P3LFnkxi

The California Highway Patrol tweeted at about 4:45 p.m. that all northbound lanes remained blocked, as well as three southbound lanes.

Rows of vehicles were completely stopped for miles in the middle of the freeway. Frustrated drivers were spotted sitting on top of their cars and standing outside of their vehicles.

The shirtless man, who officials said was possibly suicidal, appeared distressed as he moved around the freeway sign.

Large inflatable cushions were placed underneath in case the man jumped onto the freeway.

Shortly before 6 p.m., the man made his way onto a ladder and eventually came down on his own when an officer appeared to make his way toward him from the other end of the freeway sign.