Houston's largest mural artist: I want people to "feel something" 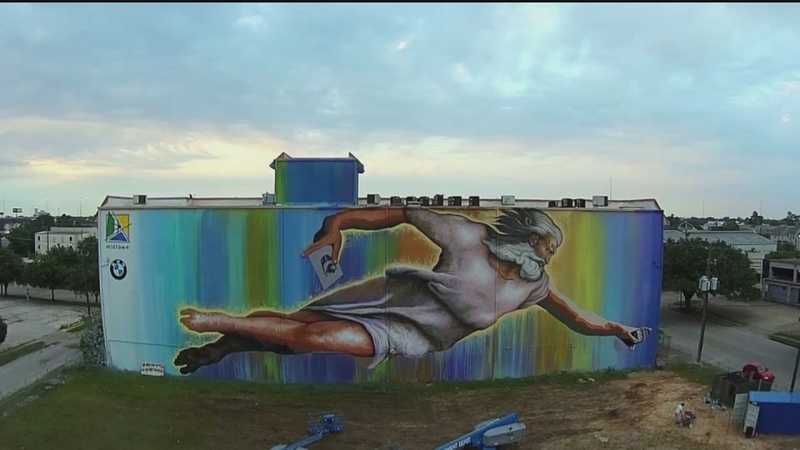 HOUSTON (KTRK) -- Houston's largest mural is officially being unveiled Saturday, but if you have driven through Midtown lately, it's hard to miss.

The five-story tall painting is based on Michelangelo's "Creation of Adam" on the Sistine Chapel's ceiling, but with a twist. Instead of God touching his human creation as in the Italian painting, God is holding a can of spray paint.

Artist Sebastien "Mr. D" Boileau said he wants people to "feel something" when they see the massive mural.

Boileau said he wanted to bring the Renaissance to an urban setting on a large scale -- and he did. The mural is about 180 feet wide and 60 feet tall -- almost exactly the same size as an Olympic swimming pool.

On last count, Boileau said more than 400 cans of spray paint and 200 gallons of wall paint -- all donated -- were used to create the artwork at 2800 San Jancinto Street.

Boileau said, "Photos don't do it justice. You have to go check it out."

Boileau and his crew worked 26 days straight -- rain or shine -- on the mural.

"My fingers are still hurting," he said.

He said some math was involved in the painting. "You can't just freehand something like this. When you're up against the wall, you don't know if you're painting the shoulder or the knee. It's that big, so definitely, there's some tricks to it."

Boileau said he feels "great" now that the mural is complete. "I need a good week of sleep. Two of my assistants are half my age and they're tired, so we're just definitely running on adrenaline at this point, but we have a big unveiling today. We made it on-time."

Boileau, asked what he wants people to walk away from the show with, said, "Public art brings people together. And today, it's just going to be an example of that. I want people to feel something. You know, when you go to a museum, you see a masterpiece. ... Hopefully people will get that feeling where you like what you see - and maybe you don't, and that's OK too."