Wrong-way driver killed on I-10 identified as HPD officer 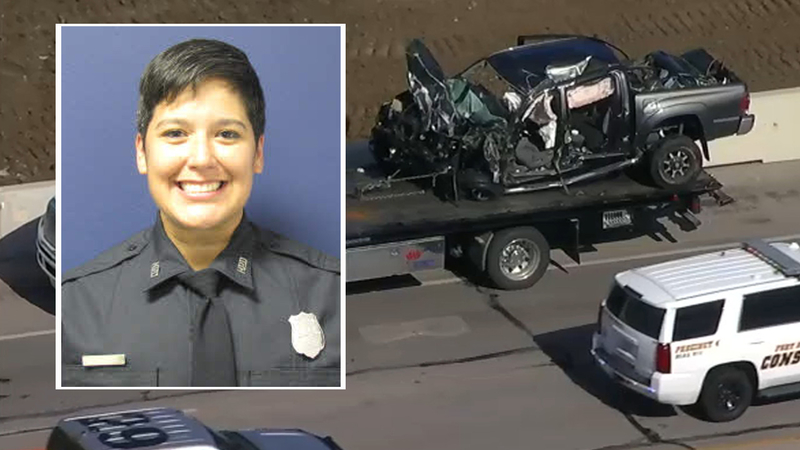 SEALY, Texas (KTRK) -- A woman killed in a wrong-way crash Thursday morning on I-10 has been identified as an off-duty Houston police officer.

Gizelle Solorio, 32, of Katy, was traveling the wrong way in the westbound lanes in a Toyota Tacoma when it collided into a 2018 Kenworth truck, according to a statement by the Texas Dept. of Public Safety.

It happened just before 6:30 a.m., approximately 10 miles east of Sealy.

Guy Pearson, 65, of La Feria, Texas, was identified as the driver of the Kenworth. Pearson was not injured, authorities said.

Solorio was pronounced dead at the scene.

With heavy hearts, we learned one of our own died in a crash on I-10 West near Sealy at 6:30 a.m. today. Officer Gizelle Solorio was off duty at the time. We ask for your prayers for Gizelle & her family. pic.twitter.com/NuS7CqeNWv

It wasn't yet known why Solorio was driving in the wrong direction.

Troopers said there were no immediate signs of intoxication, but the cause is still under investigation.

"We're combing everything with a fine-tooth comb to make sure we get to the bottom of the investigation," said Sgt. Stephen Woodard, of Texas Department of Public Safety.

It's the second wrong-way crash in the greater Houston area in less than 24 hours. A passenger was killed in a crash involving a wrong-way driver on I-45 at Rankin around 2 a.m. Thursday.

It took investigators and crews around six hours to clear the crash site along I-10.

Gizelle joined HPD in May 2017 & was assigned to the Northeast Patrol Division, according to the department.

HPD Commander Chandra Hatcher described Solorio as a shining star, saying she functioned like a veteran in her short time with the department.

Houston police gave remembrance to Officer Gizelle Solorio through a light-hearted moment during her commencement from the academy.