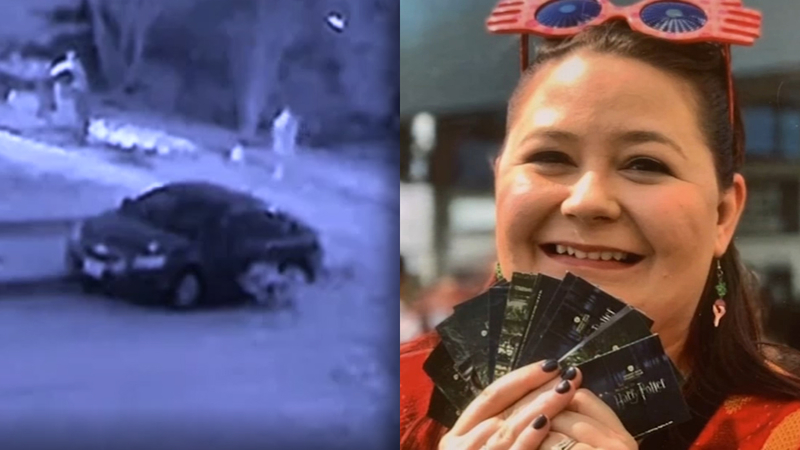 TOMBALL, Texas (KTRK) -- It's been 18 months since a 29-year-old Tomball woman was shot and killed in her own driveway as she was setting up for a garage sale.

She and her husband, Sergio, loved making trips to Orlando. Liz was an avid Harry Potter fan and enjoyed trips to the theme park there.

Before tragedy struck the Barraza family, the couple was about to celebrate their 5th wedding anniversary. To make some extra money, Liz was set to put on a garage sale on Jan. 25, 2019.

"She was literally trying to raise a couple hundred dollars to buy something nice for her husband," said Liz's father, Robert Nuelle Jr.

Her husband left for work at 6:48 that morning. Neighbor's surveillance video shows a 2013 or newer Nissan Frontier truck pull up four minutes later. Someone is seen getting out and going toward Liz.

"You can hear on doorbell camera, you can hear her say, 'Good morning,' so pretty clear, she doesn't know the person," explained Nuelle. "There's a brief conversation and then four shots."

The shooter then gets back in the truck and takes off.

Then, according to Nuelle, the shooter drove back.

"They took the chance to come back and drive by and make sure that she was dead," he said.

Liz's father said the shooting was no accident.

"This was something that was very intentional and very targeted at my daughter," he said.

Now, her family said they have two goals they hope to accomplish: get justice and keep Liz's mission of giving back alive.

She was part of the 501st Legion, a group that dresses up in costumes from the movie Star Wars and makes visits to children's hospitals.

"Their joy was to dress up and go to the children's hospital. She just loved helping people," said Nuelle.

Liz left her father a lot to be proud of, but he continues to deal with a huge loss.

"The fact that it's a senseless act against an unarmed woman by a cowardly person who just walked up and executed her is just the hardest thing imaginable," he said.