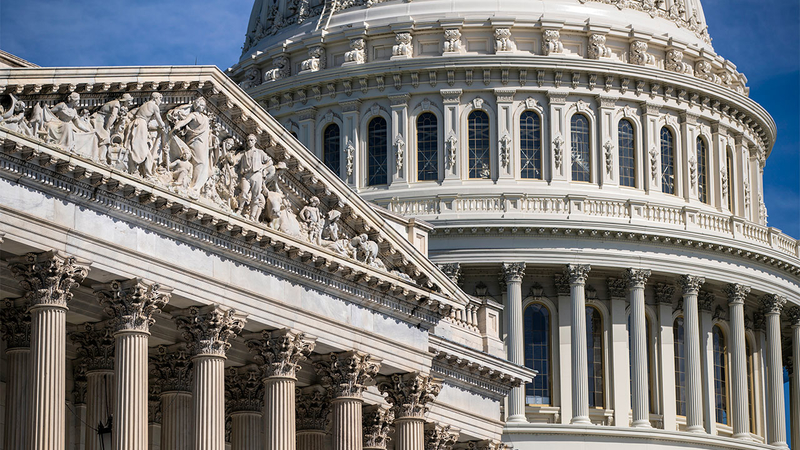 House gears up for vote on Biden's COVID relief plan

WASHINGTON -- The US House of Representatives is gearing up for a final vote on President Joe Biden's $1.9 trillion COVID relief plan in an effort to send it to the White House to be signed into law later this week.

After the Senate passed its version of the bill over the weekend, the House had initially been expected to vote on the revised legislation Tuesday, but now it appears the chamber is on track for a final vote Wednesday.

House Speaker Nancy Pelosi told reporters a final vote will come "Wednesday morning at the latest" and that the timing depends on when they get the bill back from the Senate, but that there are no hang-ups to the legislation.

Click here to check out our stimulus check calculator to see how much you could be eligible for under this plan.

"It depends on when we get the paper from the Senate," Pelosi said on Monday. "It has to be very precise, and it takes time to do that. It has some changes that they have to precisely write. It could be that we get it tomorrow afternoon and then it has to go to Rules. And we'd take it up Wednesday morning at the latest."

A senior Democratic leadership aide told CNN the vote will "most likely" take place on Wednesday.

House Majority Leader Steny Hoyer said Monday that the relief bill had not made its way back to the House yet. "I talked to Leader Schumer. He said as soon as they could get it ready, but it was complicated and they were working on it," Hoyer said when asked about the delay in sending the bill back to the House.

The House is scheduled to vote this week on the Senate version of President Joe Biden's $1.9 trillion COVID relief bill with a third stimulus check, a timeline that could see the sweeping legislation signed into law early this week.

Assistant House Speaker Rep. Katherine Clark of Massachusetts told CNN's John Berman on Tuesday that a final vote on the bill could come Tuesday or Wednesday.

"We are very excited that this bill will pass imminently. If not today, it will be scheduled for a vote tomorrow," Clarke said on "New Day." "It's really just a matter of paperwork, but we are going to have a vote as soon as we can because we know what's at stake."

The sweeping aid legislation originally passed the Democrat-controlled House at the end of February, but it needs to be taken up in the chamber again following changes made to the legislation in the Senate.

The Senate version of the bill largely mirrors the $1.9 trillion package first approved by the House and laid out by President Joe Biden in January. But lawmakers made several changes, including narrowing eligibility for the stimulus checks, trimming the federal boost to unemployment benefits and nixing an increase in the federal minimum wage to $15 an hour.

The nearly $2 trillion package includes a slate of Democratic priorities, including up to $1,400 stimulus checks to many Americans, and billions of dollars for states and municipalities, schools, small businesses and vaccine distribution. It also extends a 15% increase in food stamp benefits from June to September, helps low-income households cover rent, makes federal premium subsidies for Affordable Care Act policies more generous and gives $8.5 billion for struggling rural hospitals and health care providers.

Pelosi said she does not expect more Democrats to vote against the bill because of the changes that were made in the Senate, saying, "I think more will vote for it," and that she felt "sad" for Republicans who will vote against it.

"I feel sad for them that they are so oblivious to meeting the needs of the American people and oblivious to the support that this bill has among Republicans across the country," she said.

Republicans have so far been united in opposition to the legislation in both the House and the Senate.

Asked about bipartisanship, Clark told Berman this is a "time of great divide" but said they'll find issues to work on together. She also said the lack of support by Republicans on certain measures was "stunning."

"And while the Republicans are trying to figure out what they stand for, who they are going to be, I can tell you that we are committed to meeting this moment of historic challenge with historic progress," she said.

Progressive Democrats have expressed frustration over changes made to the legislation, but top progressives are not signaling that they will jeopardize its passage in the House.

Chair of the House Progressive Caucus Rep. Pramila Jayapal told reporters Monday that she plans to support the Senate's version of the COVID-19 relief package when it comes back to the House, even though she isn't entirely happy with what's in it.

"I don't think that the changes the Senate made were good policy or good politics," Jayapal said. "However, they were relatively minor in the grand scheme of things, with the exception of course in the $15 minimum wage."

"We take the win," Jayapal added. "We believe it's our work that made it as progressive as it is."

President Joe Biden called the Senate vote "one more giant step" toward delivering on his promises to help Americans.

Jayapal said she did not think there would be any defections within the progressive caucus.

"I'm not sure, but I don't think so, obviously people make their own decisions at the very last minute sometimes and I've had lots of conversations with our members who all feel frustrated that minimum wage was not included. All of us feel that way."

Democrats are racing the clock in an effort to get the legislation to the President's desk as quickly as possible.

An estimated 11.4 million workers will lose their unemployment benefits between mid-March and mid-April unless Congress passes its next coronavirus relief package quickly, a recent study by The Century Foundation found.

Biden told reporters Monday he will sign the $1.9 trillion COVID relief package, his top legislative priority, as soon as it lands on his desk.

"As soon as I get it," Biden said when asked when he would be signing the bill.