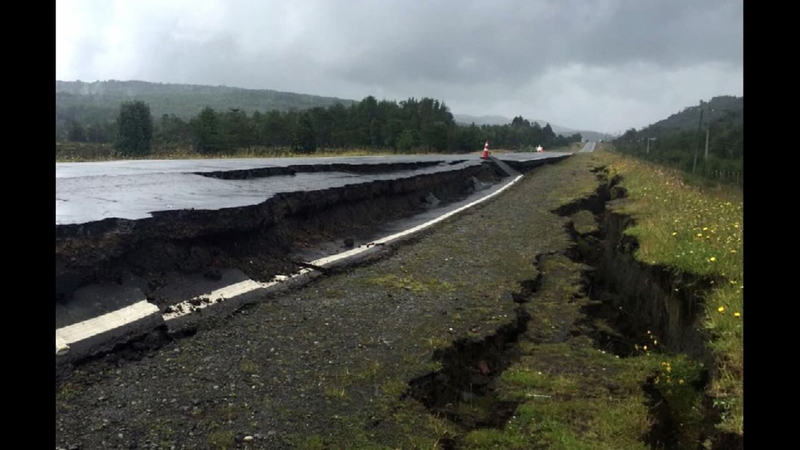 SANTIAGO, Chile -- A powerful earthquake shook southern Chile on Sunday, but there were no immediate reports of deaths and only minor known damage.

The U.S. Geological Survey said the magnitude 7.6 quake struck at 11:22am local time (8:22am CT; 1422 GMT) near the southern tip of Chiloe Island, about 25 miles (39 kilometers) south-southwest of Puerto Quello and at a depth of 22 miles (35 kilometers). The area, some 800 miles (1,300 kilometers) south of the capital of Santiago, is relatively sparsely populated.

National emergency director Ricardo Toro told a news conference that some 4,000 people were evacuated for fear of a possible tsunami following the quake, but the alert was eased about 90 minutes after the temblor.

"There is no information of loss of life," Toro said, though he said some highways were damaged. The local electric company reported that power was cut to about 22,000 customers.

Taxi driver Luis Ramirez told The Associated Press by telephone from the town of Ancud that he was washing his car when the quake hit. "I'm 48 years old and I've never felt anything so strong," he said.

A much stronger magnitude 8.8 earthquake in February 2010 generated a tsunami and killed 524 people in Chile.
Related topics:
weatherearthquaketsunami
Copyright © 2022 by The Associated Press. All Rights Reserved.
TOP STORIES
Daylight shows home destroyed after standoff with shooting suspect
What we know about man accused of shooting 3 HPD officers
5 people charged in connection with Pct. 5 corporal's murder
Driver dies after slamming into 18-wheeler's trailer on US-59
Woman shot in the shoulder during robbery set up in SW Houston
Prepare for a major closure at I-69 and 610 West Loop this weekend
Officers escort body of corporal killed in ambush to funeral home
Show More
Clouds clearing today, sunny through the weekend with rain next week
ABC13 obtains HPD scanner traffic of chase that led to shootout
'Tiger King' Joe Exotic resentenced to 21 years in prison
10 injured in PA bridge collapse; human chain formed to help
Bayou Bistro and Bar owner killed in Texas City shooting
More TOP STORIES News