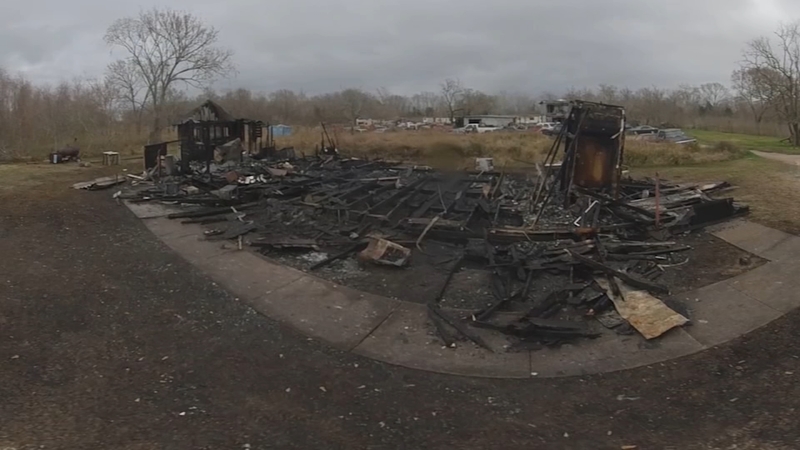 ROSHARON, Texas (KTRK) -- A church that has been around the Houston-area for 100 years has burned to the ground, and now the pastor is left trying to figure out what's next.

On Sunday morning, the Greater New Macedonia Baptist Church in Rosharon caught fire. The blaze destroyed the building and everything inside.

Pastor Carlton Wade met with ABC13 Monday as he looked through the rubble.

"I can lose my car, lose my house, lose my money, but when it came to this, I was like a helpless animal that got hurt and I had no way out," Ward said.

DESTROYED CHURCH: For 100 years, this church gave people in Rosharon a place to worship. Unfortunately, Pastor Carlton Wade stands in disbelief as it was destroyed by a fire. What happens next on @abc13houston at 6pm. pic.twitter.com/ot3rME5TWo

The Brazoria County Fire Marshal is investigating the incident. The agency told ABC13 the cause of the fire is undetermined, but it believes it was sparked by an electrical issue and was not set on purpose.

No one was inside the church at the time of the fire, and no one was hurt putting it out.

Wade said the church originally started on the other side of the street, later moving to the current location. Currently, he said there are around 70 members.

Because of its age, Wade said they couldn't get complete insurance coverage. Because of this, there's no insurance to pay for a new building.

Wade said they might use another church's facility or a tent while they try to figure out what's next. Despite no insurance money, the goal is to rebuild the church that's been in the community for 100 years.