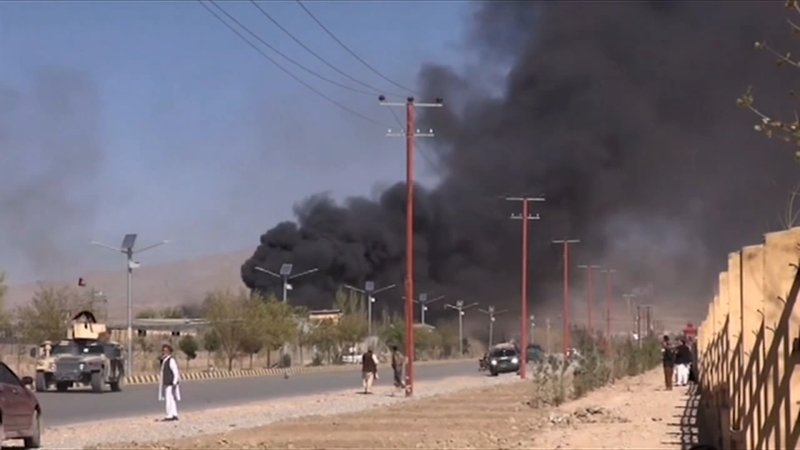 Houstonians react to plan to remove troops from Afghanistan

Raofi is a native of Afghanistan who currently lives in Houston. He said he spent five years under Taliban rule, and that amount of time had a lasting impact on him.

He recalled a period when the Taliban would hang human limbs at an intersection in Kabul as a way to show Afghans what would happen to anyone who committed a crime.

"I was young, but I still remember that time," Raofi said.

With President Joe Biden's announcement that all United States troops will leave Afghanistan by Sept. 11, 2021, many are concerned that the absence of U.S. firepower will lead to a reemergence of the Taliban.

SEE ALSO: US Secretary of State in Afghanistan to sell Biden troop withdrawal

That would likely mean more violence, a lack of human rights, and the potential for terrorism to re-establish itself in the country.

Nasir Momand is also from Afghanistan said he hopes the Taliban and the government can talk about peace.

"The only hope is, the Taliban sits with the government and talks with them about peace," Momand said

He and Raofi are both in Houston under a visa they received for helping the United States government in their home country.

The Trump administration brokered a deal with the Taliban in 2020, which stated the Taliban would meet with the Afghan government, but United States troops would need to leave the region first.

Both men are in favor of the military withdrawal, but both hope the United States will continue to help Afghanistan with other duties - including taking part in peace talks.

Secretary of State Antony Blinken was in Afghanistan on Friday to make it clear the partnership will continue.

Matthew Manriquez is another Houstonian with a unique perspective on the war.

He said he wanted to join the Army as a fourth grader when he saw the 9/11 attacks in New York, Washington D.C., and Pennsylvania. He decided to go to West Point before spending time in Afghanistan with the Army Corps of Engineers. He helped build shelters for women, train the Afghan police, and work on the country's power grid.

The U.S. intelligence community believes the Afghan government will struggle to hold the Taliban at bay if the coalition withdraws support. ABC13 reporter Chaz Miller has reaction from a Houston veteran and a former diplomat.

"The beauty of (Afghanistan) is hardly mentioned," said Manriquez. "I do think of some of the positive work we've done."

Manriquez says he isn't sure the move to remove troops from Afghanistan was done at the right time - he's worried about the potential increase in violence, as well as what it means for women and children. Joe Barnes, a former diplomat at the U.S. State Department, said the decision to bring troops home was difficult.

"There is no good solution for Afghanistan," said Barnes, who is a fellow at Rice's Baker Institute. "Sometimes in foreign policy, as in a lot of things in life, there are no good solutions."

Follow Chaz Miller on Facebook, Twitter and Instagram.
Report a correction or typo
Related topics:
houstonafghanistan warlawsuitjoe bidencivil warafghanistan
Copyright © 2021 KTRK-TV. All Rights Reserved.
AFGHANISTAN WAR
US service member says Afghan refugees assaulted her at Fort Bliss
'Eyewitness to 9/11: Behind the Lens' | Watch Now
4 US citizens evacuated over Afghanistan's land border
Biden's job approval drops to 44%: POLL
TOP STORIES
Astros Game 6 guide: Closures around Minute Maid Park back on tonight
Houston Astros on pace for record beer year
Man accused of dismembering mom's body after murder appears in court
Arrest made in case of Alvin abduction, sexual assault of a minor
20-year-old shot to death during break-in of Conroe home, police say
JJ Watt on Texans: 'It hurts me to see where' fan base is now
Don't get stuck in these traffic closures this weekend
Show More
Baldwin: 'My heart is broken' after accidental film set shooting
Prop guns: What they are and how they can kill
4 teens accused of luring victim to his death in SE Houston
SkyEye13 captures video of Bay City funeral home destroyed in fire
Peter Scolari, 'Bosom Buddies' and 'Newhart' star, dies at 66
More TOP STORIES News