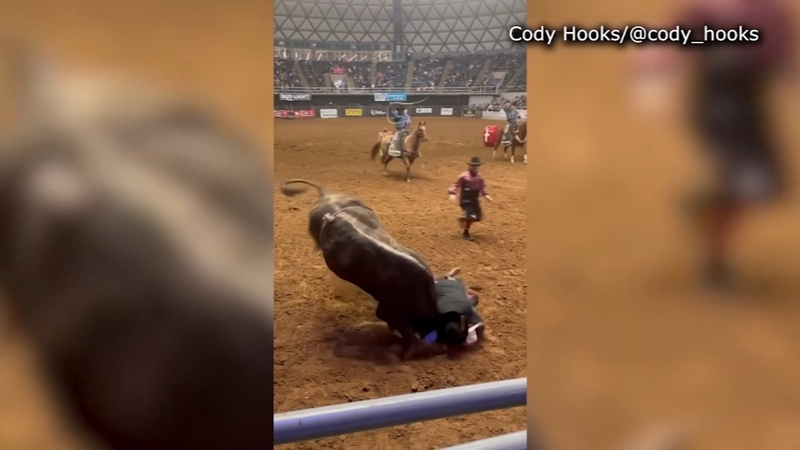 BELTON, Texas (KTRK) -- As the Houston Livestock Show and Rodeo gets underway, a video showing a Texas father jumping out of his seat and saving his bull riding son has gone viral.

Cody Hooks, 18, is from Louisiana, but was competing at a rodeo in Central Texas last month when he was thrown off.

His father, Landis Hooks, is still shaken up over what happened right after.

"You laugh about it when it's all over, but it kind of got me a little bit," Landis said.

The video shows Cody falling off the bull as bullfighters struggle to get the bull under control. Landis takes initiative and jumps on top of Cody and gets kicked by the bull.

"That's just part of the culture we were brought up in," Landis explained. "And a lot of people don't understand the hard work that these guys put in."

Landis said instinct took over once he saw his son fall.

"Honestly, that's not the first time I've jumped on somebody like that. It just comes from being around it all the time," he said. "No matter what, I'm going to do what I'm going to do for him. Did I like it, no? I didn't like it one bit."

Although the incident happened last month in Belton, Texas, the Houston Livestock Show and Rodeo has medical staff in the arena during all of its competitions.

"A lot of these riders can only do these types of sporting events for so long because injuries will catch up with them," said Dr. Kelly Larkin, a member of the executive committee. "And then they are not in good enough shape to be able to ride. These animals can be 2,000 or 3,000 pounds. It's a very dangerous sport."

NOTE: ABC13 initially reported that this happened at the Houston Livestock Show and Rodeo. The video was taken at a rodeo in Belton, Texas in February.