'Cracking down on dummies': Woman caught in HOV lane with mannequin 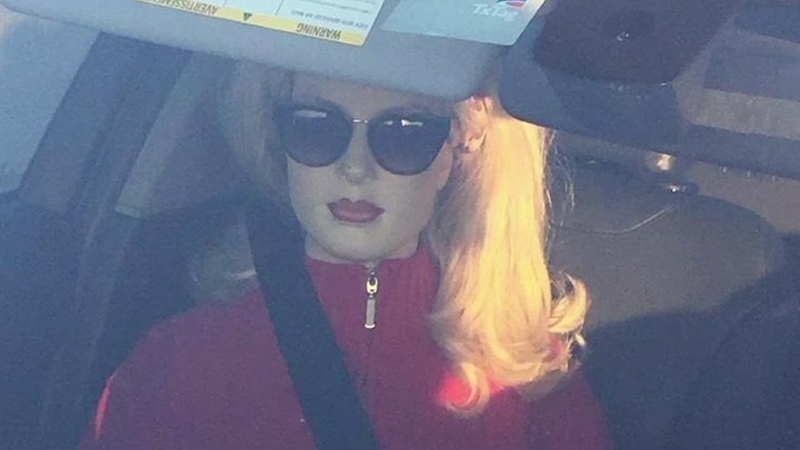 HOUSTON, Texas (KTRK) -- One driver went to great lengths to make sure the mannequin seat-belted into her passenger seat looked real at first glance, according to deputies with the Precinct 5 Harris County Constable's Office.

It had a wig, lipstick and sunglasses. It was even dressed in a red sweater for the holidays.

"This is one of the better ones I've seen," said Captain Terry Thurman, with the Office of Precinct Five Harris County Constable Ted Heap.

A deputy pulled over the driver for allegedly speeding in the HOV lane Wednesday near Barker Cypress, discovering the mannequin. Heap's office later posted a picture of it to social media, along with the caption, reading in part: "Precinct 5 deputies are cracking down on dummies!"

"The only possible excuse is to beat the Houston traffic," said Thurman.
That excuse wasn't enough. The driver was cited for the HOV violation.

Authorities say this type of issue doesn't happen every day, but it's not uncommon either. In this case it wasn't even a matter of avoiding payment a toll, Thurman says, since this was in the diamond lane. The only thing the driver was doing was saving time.

"What people will do nowadays just to beat traffic!" said commuter Cody Fisher after looking at a picture of the mannequin.

Precinct 5 says there were 1,245 HOV citations written in the last year on the Katy Freeway.

We tried to get the driver's side of the story. So far she has not responded.

Investigators say she could be fined up to $500 for the violation.