Your old Barbies and GI Joes could earn you big bucks 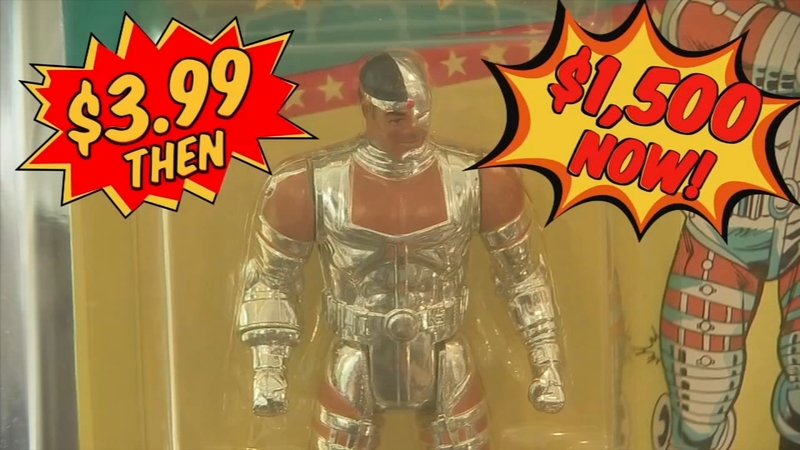 Your vintage toys could be worth big money

HOUSTON, Texas (KTRK) -- We all have a toy that takes us back to our childhood.

It turns out that old Furby or Barbie doll collecting dust in the attic could be worth some big money.

Daniel Rivera, owner of the newest Misfit Toys location in Montrose, said they have an open door policy.

"Oh I'll take this, you know, pawn shops and things like that. We don't do that, we take everything or nothing." Rivera said.

Maybe you have a box of toys collecting dust, or maybe you inherited toys from a relative that you don't want.

"This was one of those situations where they found this box in the attic," said Rivera. "As you can see, this box is a little worn and torn. There's probably about 50 vintage Barbies in there, but when we looked through them, somewhere in the middle, we might have taken her out. It's the very first Barbie that was in there."

River said he remembers purchasing dolls secondhand at a flea market for $5 to $10 as a little boy. Meanwhile, at garage sales, they go for $300.

"Folks out there, if you have a toy and it says made in Japan that's big money. He's going for about $300 as well," Rivera said.

Customer Jonathan Yoder said he sold Rivera his Transformers collection. He said it still pains him to talk about it, but he got a good chunk of money to ease the heartache.

Rivera said four major lines like Star Wars, Transformers, G.I. Joe and Ninja Turtles will get you the most money.

There is only one thing better than opening a new toy as a child and that's getting paid big money for it as an adult.

"Cyborg from Super Powers, which is like the Batman characters. Batman, Superman, that was probably about $3.99 when it came out. That is selling in our store for $15,000," Rivera said.

Rivera, a toy lover himself, said even if you don't know anything about vintage toys, there are things you can do before stopping by his store to guarantee the best offer. He said if the toy is incomplete or dirty, the price goes down.

"It can be a matter of just dusting the toys off," said Rivera. "You definitely don't want to use anything with alcohol because some of these toys are so old the paint powderizes after years and you might just wipe off some paint that wouldn't be good."

Presentation also matters. There are companies that will re-produce the original box your toy came in.

If you bring your toy inside the box, it may bump the price up by $130. They'll take all or nothing of what you bring in, including boxes of toy parts. He said sometimes the weapons or accessories can be even more valuable than the character themselves.