No travelers? How United is helping Houstonians instead 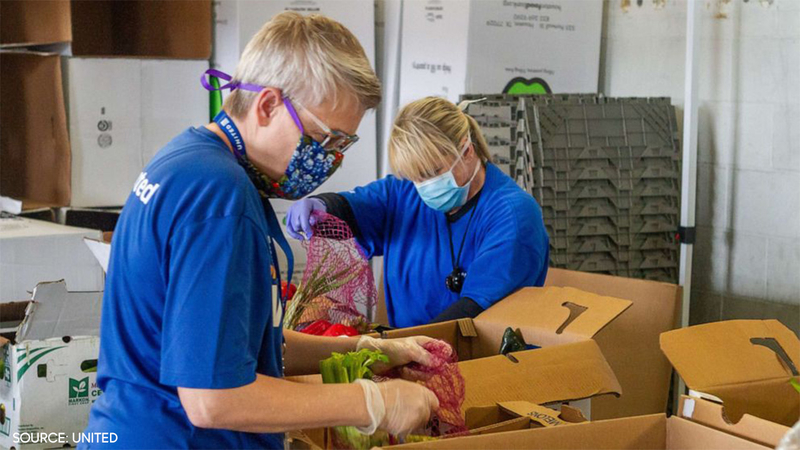 The Houston Food Bank is currently "working at 150%," according to spokesperson Paula Murphy.

While the need for food continued to increase at the food bank, demand for travel in the U.S. reached record lows. Zessin noticed many of his fellow employees at Bush Airport had extra down time at work as the number of travelers dwindled.

"They were quickly running out of room, and it was a challenge to find volunteers given the stay-at-home orders," Zessin told ABC News. "I thought we may have some assets they could use."

This week Zessin's vision became a reality at the airport. Hundreds of United employees from all departments are now sorting, packaging and distributing up to 6,000 relief packages to families in need every day.

"Mark is too humble to say this, but he has led these efforts," Houston airport United Communications Manager David Gonzalez said. "This wasn't the only idea Mark brought forth, but it's the biggest one so far."

Zessin is also working on organizing a blood drive and next week he plans on hand delivering thank you cards to health care workers. The Houston project has been so successful, United said it is working to open a second distribution center at its cargo facility in San Francisco.

President and CEO of the Houston Food Bank Brian Greene said they would not forget the generosity, especially given the "particularly trying times for United Airlines and their almost 100,000 employees" as the airlines continue to take an unprecedented financial hit.

"You get up in the morning and try to make a difference," Zessin said. "We all do."
Report a correction or typo
Related topics:
societyhoustonunited airlinesfoodcoronavirusunited arilinesfood bankcovid 19 pandemiccovid 19 outbreakcovid 19
Copyright © 2022 ABC News Internet Ventures.
CORONAVIRUS
You could get paid to get your COVID vaccine or booster
Man denied heart transplant because he has not received COVID vaccine
Scientists monitoring new omicron subvariant BA.2
Sarah Palin allegedly flouted COVID rules by dining indoors
TOP STORIES
Suspect who shot 3 officers now in custody after standoff, HPD says
ABC13 obtains HPD scanner traffic of chase that led to shootout
Man arrested in corporal's murder is 25-year fugitive, officials say
Deputies escort body of fallen HCSO Sgt. to funeral home
Another cold front passes through tonight
100 bags of fentanyl found in bedroom of 13-year-old who died from ...
Biden confirms he will nominate first Black woman to SCOTUS
Show More
Toddler credited with saving family of 7 from devastating house fire
K9 stabbing suspect accused of killing father with dumbbell
Amy Schneider's 'Jeopardy!' accomplishments reach past podium
Armed driver was trying to rob another driver on Katy Fwy, police say
These jobs are hiring, and they pay more than $14 an hour
More TOP STORIES News