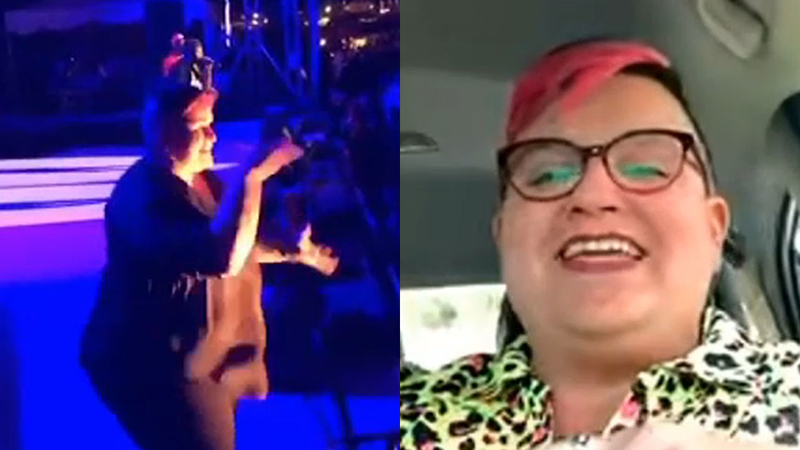 On any given night, a rapper like fast-rhymer Twista is the star of the stage. But for just one show, a woman furiously moving to the lyrics of the Chicago rap star took the spotlight.

The woman is American sign language interpreter Amber Galloway Gallego, who is from Houston. The fast moves of signing to Twista, who is known to have some of the fastest rhymes in rap, not only impressed the rapper, but millions of viewers of a viral video.

The craziest part: Gallego told ABC13 she didn't even get to practice the song before stepping on stage. But she was able to keep up with one of the world's fastest rappers.

Gallego, who has worked concerts for artists like Eminem, Snoop Dogg and Kendrick Lamar, said she tends to think fast and talk fast, and that makes her sign fast. She said the video was not planned. Instead, the rapper noticed her signing and told his manager to record her without her knowing.

Then, he made her part of the show, challenging her to keep up as he rapped.

She said she was already working as a certified ASL interpreter when she contracted spinal meningitis. She lost some of her eyesight and is now hard of hearing. She said her goal when she is working is to make the deaf and hard of hearing community feel included.

"I admire just, like, the art of music and also just making it, so that we can make it as inclusive as possible," Gallego said.

Now that the video has gone viral, she said she noticed the most common question asked is why deaf people would attend a concert. She said concerts are more than just hearing the music, but being a part of the community and living an experience.

"Deaf people feel vibrations, and science has actually shown that the vibration, it triggers the same part of the brain that hearing counterparts have triggered that release all the good, all the good chemicals in our body," she explained.

Guinness World Record shared the video, saying they have a category for the fastest time to spell the American Sign Language alphabet. It invited Gallego's application.

She told ABC13 she hasn't thought about applying yet, but promises to let us know if she does.