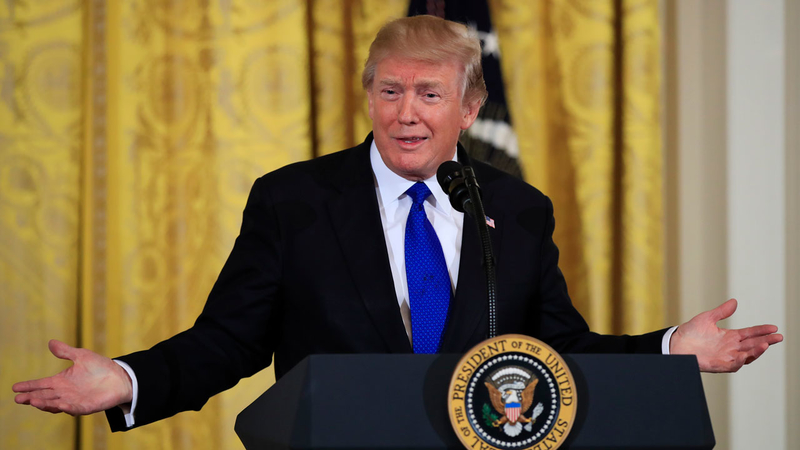 WASHINGTON, D.C. -- For the first time, we're hearing audio between then-presidential candidate Donald Trump and his attorney Michael Cohen discussing how they would purchase the rights to a Playboy model's story about an alleged affair she had with the real estate mogul.

The recordings offer a glimpse of the confidential discussions between Trump and Cohen, and confirm the president had first-hand knowledge of the proposal to buy Karen McDougal's story from American Media, the publisher of the National Enquirer.

McDougal claims she and Trump had a ten-month affair in 2006, shortly after his youngest son Barron was born. The president has denied any inappropriate relationship with McDougal, or any knowledge of payments to her.

McDougal sold her story as an exclusive to the National Enquirer in August, 2016 for $150,000, though the tabloid never published her story -- effectively buying her silence.

"I need to open up a company for the transfer of all of that info regarding our friend David," Cohen said in the recording, a likely reference to American Media boss David Pecker.

Trump is heard at one point suggesting the team "pay with cash," before Cohen dismisses the idea by saying, "no, no."

Cohen proposed paying about $150,000 to AMI, and on the tape Trump can be heard telling Cohen to make sure the payment is properly documented in order to keep a record of it. That said, the sources say that payment never happened.

A former judge is reviewing the materials seized from the raids for anything that is protected by attorney-client privilege.

Special Master Barbara Jones wrote in a new court filing released on Monday that the parties involved -- meaning Cohen, Trump and the Trump Organization -- had withdrawn their privilege designations on what were described in the court papers as 12 "audio items."

Eleven of the recordings handed over to prosecutors in New York's Southern District are conversations Cohen had with members of the media, two sources familiar with the recordings told ABC News.

Cohen is under criminal investigation by New York federal prosecutors in a case that is separate from the one that Special Counsel Robert Mueller is pursuing.

Investigators are looking into whether Cohen violated campaign-finance laws, engaged in illegal lobbying or committed bank fraud or wire fraud.

Cohen has long claimed his loyalty to Trump was unbreakable -- most famously saying "I'm the guy who would take a bullet for the president" -- but in an exclusive interview earlier this month with ABC News' George Stephanopoulos, Cohen signaled a willingness to cooperate with investigators.

"My wife, my daughter and my son have my first loyalty and always will," Cohen told Stephanopoulos. "I put family and country first."

It remains unclear who was recorded on the Cohen audio tapes, and when.

Since the search warrants were executed in April, lawyers for Cohen, Trump and the Trump Organization have been engaged in a laborious process of reviewing more than 4 million items seized in the raids. Under a court supervised plan, the attorneys are reviewing the fruits of the searches for items that are potentially covered by attorney-client privilege.

During that review, the government has had to wait to conduct its own examination of the haul. Only in the last few weeks has the court started to turn over material to prosecutors. Last week, another 1.3 million items were released to the government.
Report a correction or typo
Related topics:
politicswashington dcplayboyu.s. & worldpresident donald trumpinvestigation
Copyright © 2022 ABC News Internet Ventures.
TOP STORIES
Texas man said it was 'time to kill' election worker, records say
Laundrie claimed responsibility for Petito's death in notebook: FBI
Bundle up! Clear and cold night ahead
Bodies of 2 men found in apparent murder-suicide, HPD says
2 shot, 1 hit in head during home invasion on Houston's East End
Driver plows into hydrant, leading to NW Houston main break
Is is too late for the Ike Dike to be built?
Show More
Missing woman's cold case solved after car pulled from Brazos River
US confirmed 1st COVID case 2 years ago today
Police looking for 28-year-old in connection with teen's abduction
High school student attacked in his family's driveway in Richmond
Louie Anderson, Emmy-winning comedian, dies at 68
More TOP STORIES News