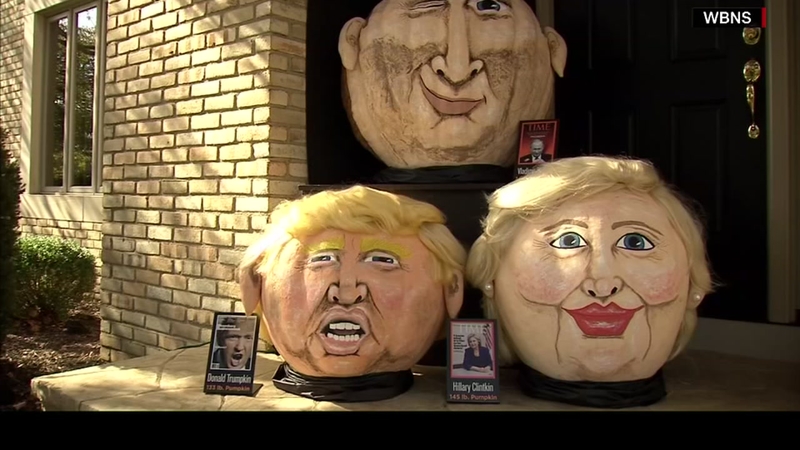 "The wild card though was Putkin. Putin. I call him Putkin," said creator Jeanette Paras.

Weighing in at 341 pounds, Vladimir is the biggest -- but it's Donald and Hillary who are getting most of the attention.

Here in Dublin, Ohio and now worldwide, Paras is famous for her portraits, though she's not really an artist.
(jeanette paras, creator) "I started Pumpkinizing giant celebrity pumpkins in 1988," she told CNN.

She's done everyone from Miley Cyrus with her long tongue to Kim Jong Un.

Kanye west was a hit with his glasses.

Since she pumpkinizes whoever's big in the news, the Donald and Hillary were no-brainers.

The trickiest feature to get right on Trumpkin was -- what else -- the hair. It's made up of 6 very large wigs.

When it comes to Halloween, the Donald is winning -- carved Trumpkins are popping up all over social media and his mask is overwhelmingly outselling Hillary's nationwide.

Usually the candidate whose mask sells best tends to win the election, but the Trump mask has an advantage.

What's more, over 95% of people who buy latex masks are men.

As for the Donald's pumpkin, uncarved, it'll last till new years.

So what happens when it's time to get rid of Trumpkin, Clintkin and Putkin?