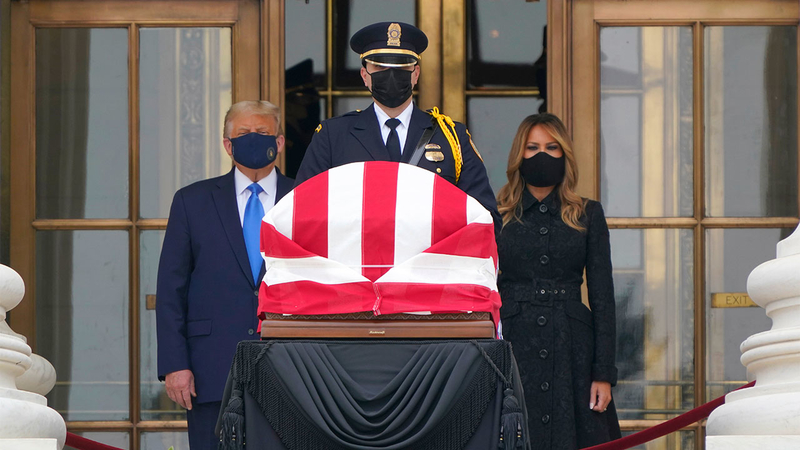 WASHINGTON -- President Donald Trump was loudly booed by members of the public on Thursday while visiting the casket of Justice Ruth Bader Ginsburg, who has been lying in repose outside the Supreme Court.

Trump, accompanied by first lady Melania Trump, stood behind the court's massive columns at the top of the court steps as people from the bottom of the steps loudly booed him and chanted, "Vote him out!"

Members of the public have been waiting for hours to file past the flag-draped casket, which will on Friday be moved to the Capitol building where Ginsburg will lie in state.

Standing a block away during the president's visit, they also shouted, "Honor her wish," according to a reporter traveling with Trump.

Who is the frontrunner to be Trump's next Supreme Court nominee?

"My most fervent wish is that I will not be replaced until a new president is installed," Ginsburg reportedly had said, her granddaughter told NPR and the BBC.

On Monday, without evidence, Trump baselessly asserted it had been made up by Democrats.

Vice President Mike Pence and his wife, Karen, stopped by the court on Wednesday to visit the casket.

Ginsburg, an associate justice who became a historic influence on the court and an American icon, died on Friday. She was 87.

While Trump praised Ginsburg in the wake of her death, the next day his campaign began fundraising off the Supreme Court vacancy she left, and the president gleefully led chants of "fill that seat" at a campaign rally.

Trump and Senate Republicans have moved quickly to confirm a justice to replace Ginsburg, with Trump pushing for a vote before the Nov. 3 election.

President Donald Trump again declined to commit to a peaceful transfer of power if he loses the Nov. 3 presidential election.