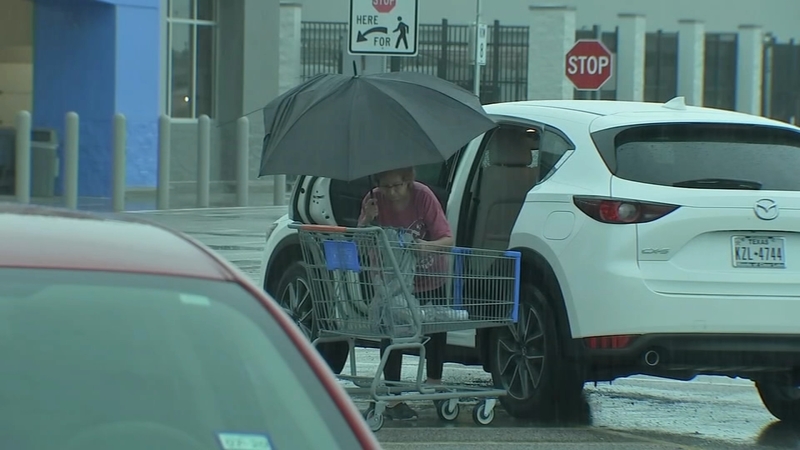 DICKINSON, Texas (KTRK) -- Dickinson city officials are working to avoid severe flooding in neighborhoods as a tropical depression is expected to bring extremely heavy rain and possibly creek and bayou flooding, and that threat is on the minds of many families.

"We have water, we have some canned goods," explained Dickinson resident Adrienne Bimage.

Bimage and Greg Warner are not taking any chances, they say. ABC13 spoke with the two at a grocery store Tuesday morning where they stocked up ahead of the expected severe weather.

"We had lots of flooding, loss of power and where I live, we get flooded in and it is hard to get out," said Bimage.

As residents prepare, the city of Dickinson is doing the same thing. City administrator Chris Heard is overseeing a multi-million dollar flood mitigation plan and says the city has already de-snagged drainage canals.

"We are seeing success, and we aren't going to hopefully see as much flooding because we are getting water to actually move through the system," explained Heard. "As you see down here, where it is going into the ulcers, you have high velocity, so it actually is getting out."

Heard also says there are other projects across the city already underway to help move water, such as the installation of new drainage pipes, with plans of more on the way.

Dickinson ISD announced some after-school activities have been cancelled on Tuesday.

While there are still streams to be cleared, the city says it has funds to clean up what remains and bond money to finish major projects, such as repairing a pipe behind resident Dorian Magee's home.

Magee thinks the area will withstand the coming deluge. Her home sits on one of the main drainage canals for the city and says it has already been cleaned out.

"It is kind of intense," said Magee. "It's just like, 'Whoa, okay.' It seems to kind of work, but I understand how they are wanting to come in and get it all cleaned up, and so, it works great that we can work together with the city."