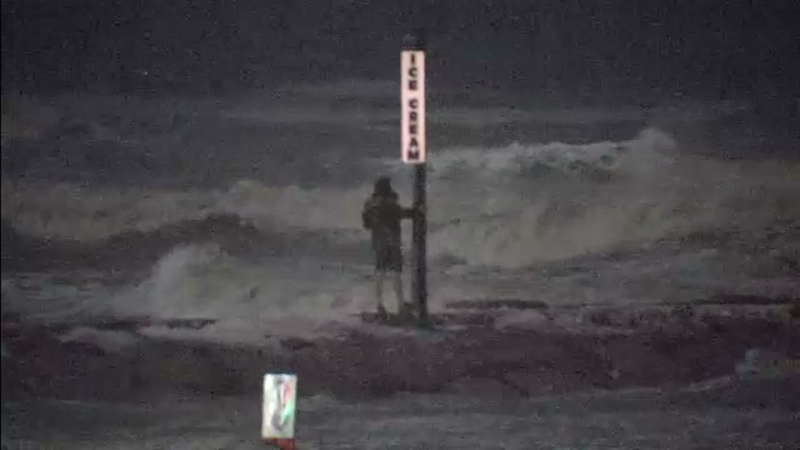 GALVESTON, Texas (KTRK) -- Galveston residents are bracing for Tropical Storm Beta, and have even felt its effects long before the storm's predicted Monday evening landfall.

Rough waves from the beaches' high tides pounded against the 61st Street fishing pier, causing the end section to break off and float away.

During live storm coverage Monday morning, ABC13's Charly Edsitty spotted a Galveston resident wandering toward the pier, despite the blocked off entrance and dangerous conditions.

The man could be seen standing among the choppy water and pier debris. After returning to shore, he spoke to ABC13.

WHOA! Video from Saltwater-Recon.com shows the moment when the rough tide started beating the pier until it finally surrenders to the rough waters. But, as you'll learn in this story, this collapse was by design.

"If you're in a place you don't know, you don't want to take any chances," Galveston resident Scott Smith explained.

He said he's lived in the area for a long time and is familiar with the tides. He witnessed Hurricane Ike in 2008.

"You can't make one wrong step because there's debris out there, nails," Smith said. "You have to watch every step you put down."

Saltwater-Recon, which captured video of the pier breaking apart, explained that the owner of the pier and his crew cut sections of the deck and railing around 6 p.m. Sunday, hoping to salvage the remaining sturdy portions.

They had also hoped Mother Nature would do the rest, and as it turns out, she did.

WATCH: Here's a look at some of the effects of Tropical Storm Beta on the Texas shore, including broken piers, rocky roads, high winds and more.