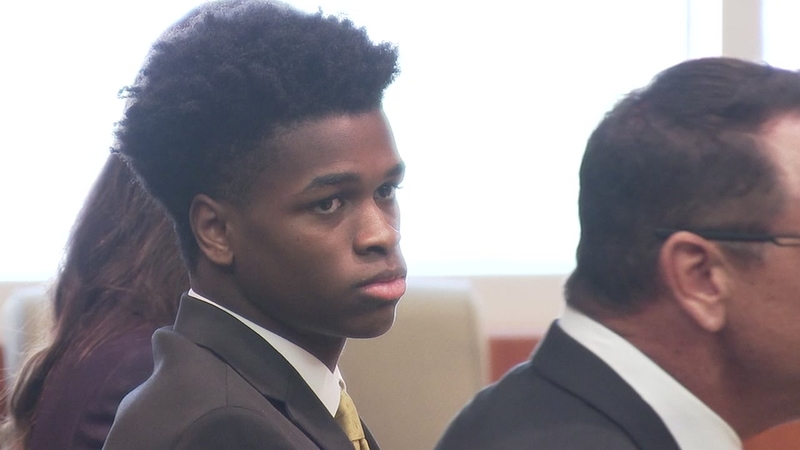 HOUSTON, Texas (KTRK) -- Opening statements began Tuesday morning in the murder trial of A.J. Armstrong, the teen accused of killing his parents in 2016.

A.J. is accused of shooting his mother, Dawn, and father, Antonio, to death as they slept at their home on Palmetto at Mapleridge in southwest Houston on July 29. Their son, who is now 19, has always maintained his innocence in their deaths and pleaded not guilty to the capital murder charges against him.

"Dawn, the defendant's mother was on the left side of the bed, and she was shot twice in the head while she laid there safe and sound and healthy," prosecutor John Brewer said. "She probably never knew it was her son that killed her."

Antonio and Dawn were killed in their bedroom on the second floor, where their daughter's room was also located. A.J.'s room was on the third floor.

Prosecutors focused on the Armstrong's alarm system. Brewer said that the alarm never went off, even though A.J. told police he saw a masked intruder inside the home.

Brewer said that police looked at motion detector records and learned that the killer came from upstairs. The upstairs motion detectors didn't go off until 1:09 a.m., about 30 minutes before A.J. called 911 and said he heard shots in his parents' room.

Jury break. Big opening statements from both sides. Prosectuors: concentrated on the Armstrong's alarm system: never went off, though AJ told police he saw a "masked intruder" in the home. Motion detectors didn't go off until 1:09 am, 30 minutes before AJ called 911. #abc13

Prosecutors on AJ calling 911: "What happened between 1:09 and 1:40 am when the defendant said he heard shots and called 911? That’s a long time." Did AJ "change clothes? Put a gun downstairs? Whatever you need to do.” #abc13 #ajarmstrong

Meanwhile, the defense countered that within minutes of leaving the Armstrong home, Houston police had already made up their minds that A.J. killed his parents, alleging bias.

But perhaps one of the biggest developments is that A.J.'s attorneys seemed to suggest his brother Josh, who they claim has a history of disturbing behavior, had access to the home.

He even allegedly showed up to the scene when the killings happened and was interviewed by investigators, who bagged his hands for three to four minutes, the defense said.

Attorney Rick DeToto said there is evidence that Josh has been in and out of a psychiatric facility for the past three years.

DeToto claimed that Josh lived less than two minutes away from the home.

"When asked by the Houston Police Department where he was at the time of the murders, he refused to answer," DeToto said of Josh. "He didn't go visit his dad when he was in the hospital when fighting for his life. He did not show up."

#BREAKING - AJ's Armstrong lawyers suggest his brother Josh had access to the parents house. They say he's got a history of disturbing behavior. #abc13 #hounews https://t.co/lI73A6U7N5

When speaking to jurors, DeToto continued to set the stage for what to expect in the trial, saying that they will hear from A.J.'s girlfriend and his girlfriend's mom, who claimed A.J. was smiling and joking before the murders.

DEFENSE: You’ll hear from AJ’s girlfriend, GF's mom who say he was joking around, texting being a goofball the night of the murder (before murders). “Is that demeanor consistent with someone who would 30 minutes later execute their parents? That’s reasonable doubt.” #abc13

DeToto also countered the prosecution's take on the alarm system, saying there are holes in their records on the alarm.

Last fall, A.J. spoke to ABC13 in an exclusive interview.

"There was somebody else in the house that night and I know that this is something I'm being accused of just makes everything so much worse," he said.

A.J.'s attorneys had motioned to not have the statements that he gave to police played in court. However, the judge denied that move on Tuesday, so jurors will hear the taped interview given to police after the murders.

A special selection of jurors was required in the case, meaning 120 people were summoned. That's double the typical amount.

In the end, nine women and five men were selected, but two of those are alternates.

The trial is expected to last for weeks. The judge said it is scheduled until the end of April.

RELATED:
Jury seated in trial of teen accused of killing his parents