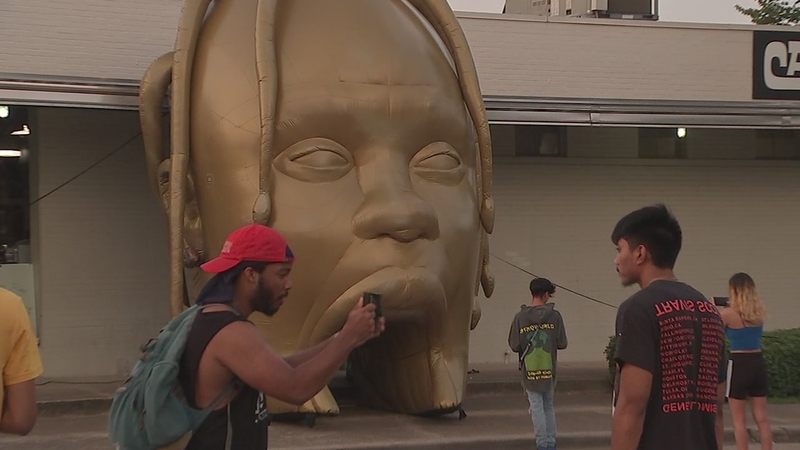 HOUSTON, Texas (KTRK) -- IT IS FINALLY HERE. After months of fans waiting patiently for the highly-anticipated Travis Scott album, he has given a release date for his new album "Astroworld": Aug. 3.

Scott is known for going all out with his album releases and having a good time. So he decided to have a trailer video on YouTube this time, which should make fans feel like they can run through a brick wall because of the excitement.

There was a lot of speculation on the release date of "Astroworld." Whether it was his producer posting a picture of a hard drive or Scott tweeting about it, fans eagerly waited to find out when they can hear the new tracks.

The motivation behind the album name should be pretty self-explanatory. Scott is from Houston, which used to be home to the Astroworld theme park. Giant Travis Scott heads have been popping up around the country and were inspired by the Texas Cyclone ride.

the Travis Scott head was moved to Cactus Music in Houston, TX
[photo by @dayenitedan] pic.twitter.com/av5Uh9rRxx

The Scott inflatable was displayed outside Cactus Music Monday, where a big crowd gathered to take photos with it.

Scott has been an avid fan of all things Houston. You can typically see him courtside at a Rockets game or hanging out at Minute Maid Park to watch the defending World Series champion Astros. James Harden and Scott have developed a friendship and have been seen partying together.

In June, thousands of people showed up to celebrate the launch of Scott's Houston-inspired Nike shoe.

Scott told Eyewitness News that for his first collaboration with the Jordan brand, he wanted to give Houston a sense of style.

"I'm just a citizen of Houston. I always thought the Oilers had the freshest jerseys," Scott explained.

Here's some pictures of the Scott inflatable around other cities in the U.S.