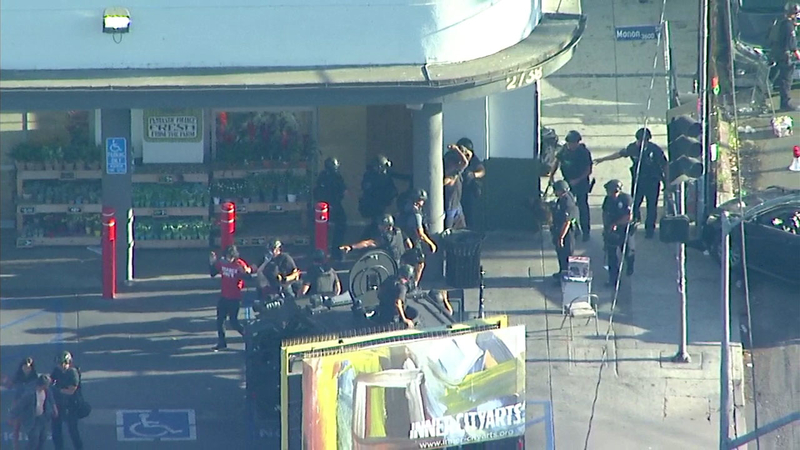 LOS ANGELES, California -- A woman is confirmed dead following a barricade situation involving a shooting and chase suspect who held hostages inside a Trader Joe's in Silver Lake on Saturday.
The suspect is in custody after surrendering to police in the hours-long barricade. Many hostages were also spotted walking out with their hands up.

Los Angeles Mayor Eric Garcetti and LAPD Chief Michel Moore said at an afternoon press conference the woman killed was fatally shot by the suspect and pronounced dead at the scene.

Los Angeles police said the incident started with a family dispute where the suspect shot his grandmother and another female victim, police said.

The grandmother suffered about seven gunshot wounds and was listed in critical condition at a nearby hospital, the chief said.

The suspect then fled in his grandmother's 2015 Toyota Camry, taking the wounded female victim with him. Police said she suffered a graze wound to her head and is expected to survive.

A pursuit then ensued until the suspect crashed, and an officer-involved shooting occurred. Police said that at one point during the incident, the suspect fired at officers.

UPDATE: We can confirm that there is an active barricaded suspect within a #TraderJoes in #Silverlake. An active tac-alert has been declared to ensure all resources necessary will be available. Please continue to stay clear of the area.

Police said the suspect fled the vehicle and ran into the Trader Joe's where several SWAT officers and an armored vehicle were surrounding the building.

Los Angeles Fire Department officials confirmed another 20-year-old woman was transported in fair condition. It's unclear what type of injuries she sustained.