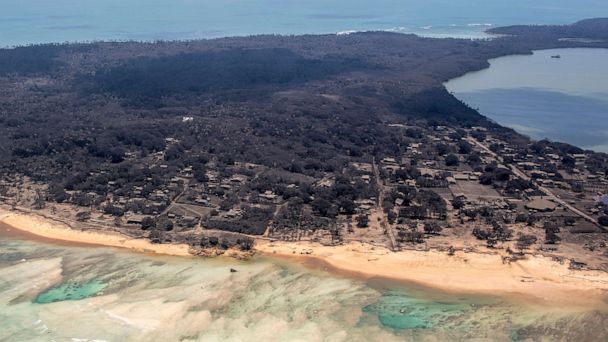 LONDON -- It may take weeks to repair an undersea fiber-optic cable connecting Tonga to the rest of the world, which was severed during Saturday's massive eruption of a submarine volcano near the South Pacific archipelago nation.

New Zealand's Ministry of Foreign Affairs and Trade said in a statement Wednesday that U.S.-based company SubCom, which builds underwater cable networks across the globe and is the repair contractor for more than 31,000 miles of cable in the South Pacific Ocean, "advises it will take at least four weeks for Tonga's cable connection to be repaired."


The foreign ministry added that Caribbean-based mobile network provider Digicel has set up an interim system on Tonga's main island, Tongatapu, using the University of South Pacific's satellite dish, which may allow a 2G connection to be established Wednesday, though the ministry said it will be "limited and patchy."

Domestic and international communications for Tonga were cut off due to damage to the undersea cable. While limited communication within Tonga has been restored through satellite telephones and high-frequency radio, the internet is still down, the Tongan government said in a statement Tuesday.

Satellite images captured the blast of the Hunga Tonga-Hunga Ha'apai volcano on Saturday evening, with NASA's Earth Observatory calling it "one of the most potent volcanic eruptions in decades."

The explosion "obliterated" the small, uninhabited South Pacific island where the submarine volcano was located, about 40 miles north of Tonga's capital, Nuku'alofa, and "produced an atmospheric shock wave and tsunami that traveled around the world," the observatory said in a statement Saturday.

Nearly 50-foot tsunami waves crashed ashore on several of Tonga's 170 islands, devastating villages, while a huge mushroom-shaped cloud of volcanic ash, steam and gas covered the entire Polynesian kingdom, according to the Tongan government. A search-and-rescue mission was launched the following morning and at least three people have been confirmed dead -- a British national and two Tongan citizens. There were also a number of injuries reported, the Tongan government said.

The United Nations Office for the Coordination of Humanitarian Affairs (OCHA) said in a statement Wednesday that its humanitarian partners on the ground reported the entire population of Tonga -- more than 100,00 people -- had been impacted by volcanic ash and tsunami waves. There's been no reported evidence of ongoing volcanic or tsunami activity within the region in the last 24 hours, according to OCHA.

"However, activity could resume at any time without warning," the agency said.

Data from surveillance flights over Tonga showed up to 100 homes "severely damaged" on Tongatapu and 50 on the nearby island of 'Eua. Mango and Niniva were also "heavily impacted" with structures destroyed and trees uprooted, but those islands are only thinly populated, according to OCHA.

The Tongan government has declared a state of emergency that will last until at least Feb. 13.


Sea and air transportation have been impacted due to continuing large waves in the waters surrounding Tonga as well as volcanic ash blanketing airport runways. Water supplies have also been "seriously affected," the Tongan government said.

Emergency response operations, including distribution of disaster relief supplies, initial assessments of the damages and clean-up of the airports, were still underway Tuesday, according to the Tongan government. New Zealand's foreign ministry said the work to clear airport runways in Tonga is expected to be completed Wednesday.

Australia and New Zealand have dispatched naval ships carrying relief supplies and clean drinking water to Tonga, their South Pacific neighbor. New Zealand's vessels are expected to arrive by Friday, depending on weather conditions, according to New Zealand's foreign ministry.