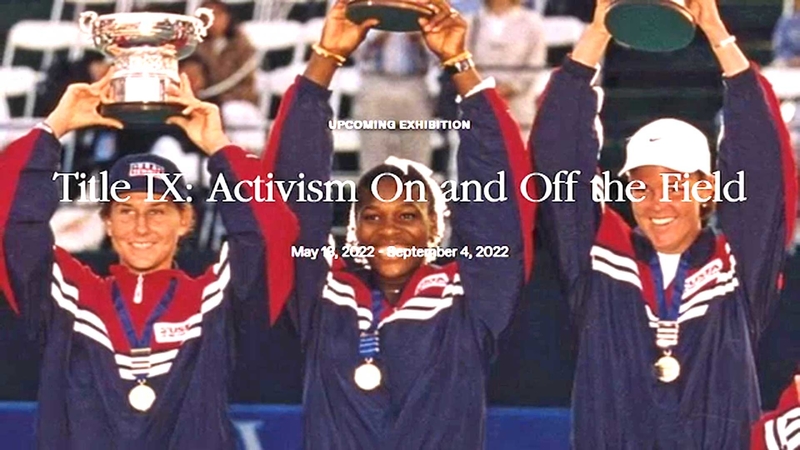 NEW YORK CITY -- The NCAA Women's Basketball Championship: behind all those shots, all that achievement, is 50 years of Title IX.

The legislation, signed in 1972, was aimed at leveling the playing field for the female sex.

"The early lobbyists for the bill were not thinking about sports, they were thinking about broader educational access," says Laura Mogulescu. "But sports very quickly became a flashpoint."

Mogulescu is one of the curators of an exhibition set to open in May at the New York Historical Society called Title IX: Activism On and Off the Field.

"If you look at the number of girls and women who became interested in athletics, those numbers just increased so much in the last 50 years," she said.

That growth was fostered in part by more schools offering sports for girls, particularly at the collegiate level, making it possible for girls not just to compete, but to pursue professional careers.

The exhibit highlights some of those incredible successes: clothing from Serena Williams, toys depicting female athletes and a Wheaties box featuring Mia Hamm.

And then there's what Title IX has done for women in terms of education.

"The numbers of women who've graduated from college and graduate school have vastly increased," Mogulescu said. "And following that, there is also an increase of women in professional careers."

The actual Title IX legislation is just 37 words, 37 words that changed so much. But so few words continue to require continued advocacy.

"Something that's come clear in the exhibition is that its protections and enforcements are very dependent on presidential administrations," said Mogelescu. "So the work of activism is never really done... in terms of ensuring everyone has access to education."

This year's 50-year anniversary, therefore, is a time to reflect on the progress - but also a time to note the inequities that still exist and need to be addressed.