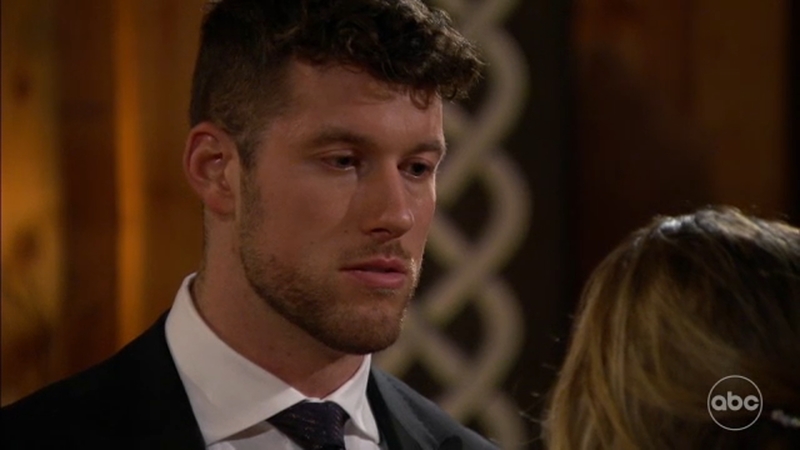 'Bachelor' Clayton puts up final fight for love in Iceland

NEW YORK -- Jesse Palmer said it was the most controversial night in "Bachelor" history and he was not kidding. The finale started with Jesse Palmer knocking on Susie's hotel room and asking her if she could go talk to Clayton. Jesse told her that Clayton regrets the way their relationship ended. (The women in the live audience were shaking their heads no, no girl, don't do it.) Clayton meantime was telling his parents how Susie was the one for him. As he thought she would never show up, Susie walked in the door. She asked Clayton to go outside and talk first before she dealt with getting to know his parents.

Everything is going to change. 😳 Get ready for the most dramatic finale of #TheBachelor TONIGHT. pic.twitter.com/8ynrC4eNcA

Susie Talks to Clayton
Susie told Clayton that he's a "good human" but she was shocked by the way he treated her and he made a "turn." Susie said that he made her question everything and she felt humiliated. Susie said she felt like a stray dog that had come into his home and he was shooing her out. She said that him making her feel "wrong" and "bad" was the heartbreak. "I did not mean the things that I said," Clayton said. He admitted that he was freaking out because he was losing her. He told her he knows that they have a love worth fighting for. Susie said she hears him, but she doesn't know where they stand with each other. Susie then got back in the limo and drove off. Where is she going? Don't they have a lot to figure out?

Clayton's Double Breakup
Clayton realized it was time to break up with Rachel and Gabby. He said his heart is with Susie. He realizes that he told both of them that either of them could be his wife and that's not true anymore. He expects them to "express negative feelings." Gabby and Rachel were together talking about their time meeting his family and they both noted that they never did go on a final date with Clayton so that was different than the norm of the show. Clayton walked into the room and I couldn't believe he was going to tell them both at the same time. I feel like they deserve a one-on-one breakup. Rachel and Gabby immediately knew they were getting bad news.

He told the women that he meant what he said when he told both of them that he loved them. He said that his heart is with Susie, and not them. Gabby said that she didn't have anything to say to him and he should have thought about it more and put himself in their shoes, and she walked out. Rachel sat there with her hand over her mouth as Clayton got up and followed Gabby. "I actually don't know who you are at all," Gabby told Clayton in her room. She said she doesn't believe anything he says. Gabby called him out for stringing them along and taking away the fact that it was her decision to leave and now it's his. She called him out for breaking up with her and Rachel together. He apologized over and over. He asked if he could walk her out and she said, "No."

Gabby on the Live Show
Then we cut to the live show where Gabby came out on stage and her grandpa immediately ran up to give her a big hug. Isn't he the cutest? Gabby said she's doing well and watching the show back has given her closure. She said she felt angry and betrayed at the way the breakup went, and she was hurt because she loved Clayton. Still, she has no regrets.

Clayton came out on stage to face Gabby for the first time since their breakup. Gabby said that after watching it back she just feels misled and she wasn't given all the information when she was making decisions on whether to leave or not. Clayton said he was incredibly sorry that she felt betrayed and said he didn't have malicious intent but he was sorry. Gabby said that she felt that Clayton was pitting her, Rachel, and Susie against each other even though he loved Susie the most. "When you say love you are assuming responsibility to love them" and protect them and Gabby said he didn't do that. Of course, Clayton just said he was sorry again.

Clayton returned to the breakup room where Rachel was still sitting and crying. Rachel said she knew she was in love with him from the day that he met her parents, and him yelling I love you up to her on their Fantasy Suite date was the best time of her life, and then it all crashed down with the rose ceremony and this breakup. She was the only one who stayed and didn't walk away from him. "I promise you when you look back on this, this is going to haunt you the fact that you let me go," Rachel said. She told him that he never fought for her. Big Tony, her dad, in the audience of the live show did not look amused by his daughter having her heart smashed into a million pieces by Clayton. Clayton apologized for not being able to be 100% in it. "Can I give you a hug and say goodbye?" he asked. Rachel shook her head yes and told Clayton, "You gave up on us." She sobbed as she said in disbelief, "You're going to put me in this car right now?!" It was awful. Rachel did not deserve this. She cried so hard her fake eyelashes detached. Rachel noted that he didn't even cry saying goodbye to her. "At least I have an answer and I don't have to cry myself to sleep every night wondering what's going to happen," Rachel said.

Rachel on the Live Show
On the live stage, Rachel cried watching their breakup back. She said the hardest part about watching it is knowing how in love with him she was and she had no clue what was going on behind the scenes with Clayton. "I was watching someone get completely blindsided," she said. Rachel thought there was "complete disrespect" in the fact that Clayton broke up with her and Gabby together. Rachel said that she fought for Clayton all the way to the end. "I do not have feelings for him anymore," she said.

Clayton came back out on stage where Rachel sat stone-faced. She told him that none of her emotions were for him or about him and she didn't have any lingering feelings. "I became collateral damage in your journey for love," Rachel said. She also called out his complete lack of empathy for her and Gabby. Clayton told her that he was incredibly sorry for his actions and the way he handled things. Rachel's mom was seething in the audience! She looked like she wanted to yell out at Clayton. "I just don't believe you," Rachel said as Clayton continued to apologize. Then, Jesse asked her parents what they wanted to say. But, they held it in, basically said they didn't have anything nice to say. Clayton apologized directly to them. Jesse asked Clayton if he was haunted by his breakup with Rachel and he reiterated that he just followed his heart. She then flat out asked him, "Did you tell me you loved me in order to sleep with me?" He said, "No, I said it because I felt those feelings then." "I just don't believe you," Rachel said.

Clayton Throws a Hail Mary for Susie
Back in Iceland, Clayton looked at an engagement ring and decided he was going to put it all on the line for Susie. Jesse delivered a letter to Susie and in it Clayton begged for Susie's forgiveness. He asked her to meet him in the countryside. Eventually, a limo pulled up with Susie inside. She looked beautiful! Clayton thanked her for showing up and then recapped their wild journey. He told her he will never stop fighting for her. He took out the ring and told her, "I am this serious about it." Clayton said that he wants to grow with her, have a family, and be the man she wants him to be.

Susie said that everything he has said means a lot to her and she knows that he's incredible. "There's no doubt about our connection, and the love I have in my heart is so real and I know that you have it too, but I don't feel like the kind of love I have for you isn't the kind of love you have for me," she said. "I have made the decision to leave Iceland alone." He asked her if it was completely over, and Susie said that she felt like it was over. She asked to give him a hug. Wasn't it a bit funny that she said a lot of the same things that he told Gabby and Rachel about the love being real, etc.? He walked Susie out, they hugged, and he told her he wished nothing but the best for her. Susie got in the limo and breathed a sigh of relief.

Bachelor History
This was the first time that "The Bachelor" was rejected in his proposal. Jesse Palmer said, "Clayton ends up alone...or does he?" The twists and turns this season! They have just been just crazy!

Clayton is Dating...Susie
Clayton was back on the live stage to talk about what his life is like now and if he's in a relationship. He said he thinks he's a better person now based on his experiences. Clayton revealed that he went back to normal life and someone reached out to him...it's Susie! Clayton lit up and they hugged. Jesse said, "Wow, what a pleasant surprise! What are you doing here?" Susie said she had to walk away because she needed some time. They had to relay the foundation of their relationship and now they are back together. "That's my boyfriend!" Susie said. She told Jesse that the time apart helped reset things. Basically, she needed to real-world date him without any other women around.

Jesse asked Susie if she's in love with Clayton and she said, "I love you," to him. "I think we're both expecting a little backlash," she admitted. They are a little worried that people aren't rooting for them, but they are in love! "1000%," Clayton said about the journey being "worth it." "I could not be more in love with this woman," he said. Jesse asked him what was next...hinting at a ring. Susie said that if they were going to do that she would be asking him. Clayton is moving to Virginia to be with her and they are giving their relationship a real shot. Then, Clayton walked off stage and grabbed a rose, and offered Susie the final rose. "Yes! Of course," she said.

👇🌹 SPOILER ALERT 🌹👇#TheBachelorette is BACK like we've never seen it before! See you on July 11, Bachelor Nation! 💍 pic.twitter.com/5fFqz6vqbg

Now that we know that Clayton and Susie are happily dating, it's time to get to the business of our next "Bachelorette." There's two! It's Gabby and Rachel! They deserve it, these two have been through the wringer. So this is the first time ever that there will be two "Bachelorettes" for the whole season. There's another love story this season, best friends born - Gabby and Rachel! So there are so many questions...will they date the same guys? Will they ever double date? Time will tell! Their season of "The Bachelorette" premieres on Monday, July 11.