By Abby Livingston and Darla Cameron, The Texas Tribune 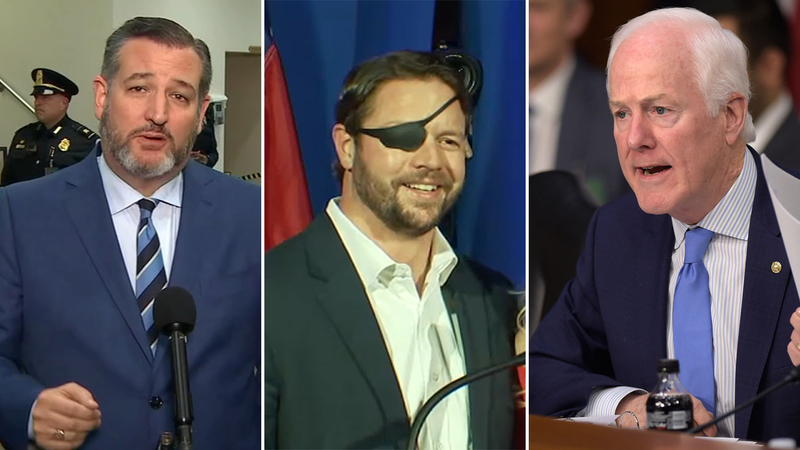 A growing number of Texas Republicans are moving toward the reality that in a little over a month, former Vice President Joe Biden will become president of the United States. But a large number of GOP members of the Texas delegation still have not acknowledged Biden's victory.

As expected, all Democrats who responded were emphatic that he is the president-elect. Some Republicans continued to question the legitimacy of the election, while others - including the likes of U.S. Rep. Dan Crenshaw, a rising GOP star from Houston - simply stated that Biden would become the 46th president.

The Texas Tribune asked every member of Texas' congressional delegation whether they accept Joe Biden as the president-elect. Here's what they said.

Sen. John Cornyn (R)
Yes
"I would say that subject to any other litigation that could occur between now and Jan. 20, the answer is yes." Source

Rep. Van Taylor (R, Dist. 3)
Yes
"Our Constitution defines the process for electing the president. Today, the Electoral College voted and on January 20, President-elect Joe Biden will be sworn in as the 46th President of the United States. Anne and I extend our prayers and well wishes to the Biden and Harris families as they prepare for this momentous undertaking."

Rep. Lance Gooden (R, Dist. 5)
Unclear
Gooden's office did not respond, but he wrote on Twitter on Monday, "The Electoral College is casting their votes. Democrats will soon say it is time to move on. They are 100% WRONG. We should not move on until the massive claims of voter fraud are answered and addressed!" Source

Rep. Al Green (D, Dist. 9)
Yes
"Yes, I accept Joe Biden as President-Elect today, and on January 20, as President of the United States of America; the Constitution has prevailed."

Rep. Kay Granger (R, Dist. 12)
Yes
Granger's office did not respond, but she previously told CNN in November that the time had come for President Donald Trump to "move on." Source

Rep. Mac Thornberry (R, Dist. 13)
Yes
Thornberry's office did not respond, but per The Dallas Morning News, he previously stated, "We're proceeding step by step through the normal constitutional process. And certainly, Dec. 14 when the electors vote - that's how a president is chosen. So, things need to move ahead." Source

Rep. Vicente Gonzalez (D, Dist. 15)
Yes
"Joe Biden will be the 46th President of the United States. Kamala Harris will be our next Vice President. The people have spoken. No amount of litigation can change that fact. End of story."

Rep. Sheila Jackson Lee (D, Dist. 18)
Yes
Jackson Lee penned an op-ed in which she wrote, "... as we can see on Monday, December 14th, the Vice President [Biden] has already received 306 electoral votes, which clearly gives him enough electoral votes to secure the presidency!" Source

Rep. Jodey Arrington (R, Dist. 19)
Unclear
"Given the widespread and unprecedented changes to election laws, voting irregularities, and allegations of fraud, it is important for all claims to be examined and resolved by the courts before declaring a winner. Doing this will ensure the integrity of the electoral process and strengthen public confidence in the outcome."

Rep. Joaquin Castro (D, Dist. 20)
Yes
"Yes. The Electoral College affirmed President-Elect Joe Biden's victory. We now need to come together to rid our nation and the world of COVID-19, and work hard to build back better."

Rep. Chip Roy (R, Dist. 21)
Unclear
"I have plenty of views about the election, the various lawsuits at play, and the court decisions, and have been sharing those as appropriate. I am not going to respond to the media game of asking only questions its members care about asking after watching them literally refuse to ask Wendy Davis a single important question - of many possible - throughout a hard-fought campaign."

Rep. Will Hurd (R, Dist. 23)
Yes
Hurd's office did not respond, but he tweeted days after the election, "It's time to come together. America has spoken and we must respect the decision. More unites us than divides us; we can find common ground. I hope the president-elect can embody this. I wish him good luck and I wish the president a successful final few weeks. God bless the USA!" Source

Rep. Henry Cuellar (D, Dist. 28)
Yes
"President-elect @JoeBiden surpassed the 270 votes required in the Electoral College to become the 46th President of the United States. It's time to heal, rebuild and move our country forward." Source

Rep. Sylvia Garcia (D, Dist. 29)
Yes
"Today the Electoral College reflected the true will of the American people. It cemented what America voted for in November, positive change and a promise towards progress and healing. I look forward to continuing to fight for an inclusive future for all Americans alongside President- elect Joe Biden and Vice President- elect Kamala Harris."

Rep. Eddie Bernice Johnson (D, Dist. 30)
Yes
"Today, as they have done every four years since the beginnings of our democracy, the Electoral College met and cast their votes according to the will of the people - and democracy won. I am proud to recognize President-elect Joe Biden and Vice President-elect Kamala Harris. ... Now, with a new vision and new leadership in the White House, it is time for unity and continuity as we prepare for the work ahead."

Rep. Colin Allred (D, Dist. 32)
Yes
"Our democracy has been tested, and today the Electoral College will certify Joe Biden's win. Dangerous attempts to subvert democracy show that we must never stop fighting for a more perfect union. I look forward to doing just that with President Biden." Source

Rep. Marc Veasey (D, Dist. 33)
Yes
"Today, the Electoral College confirmed that @JoeBiden will be our next president. It's time for President Trump to stop threatening our democracy and acknowledge that President-Elect Biden won this election fair and square." Source

Rep. Lloyd Doggett (D, Dist. 35)
Yes
"Our next President Joe Biden is the clear winner of a free and fair election, despite the deeply shameful Texas Republican attempt-devoid of any evidence or justification-to reject the lawful votes of millions and undermine our democracy. The Trump cult lost, but it poses an ongoing threat to our democracy."