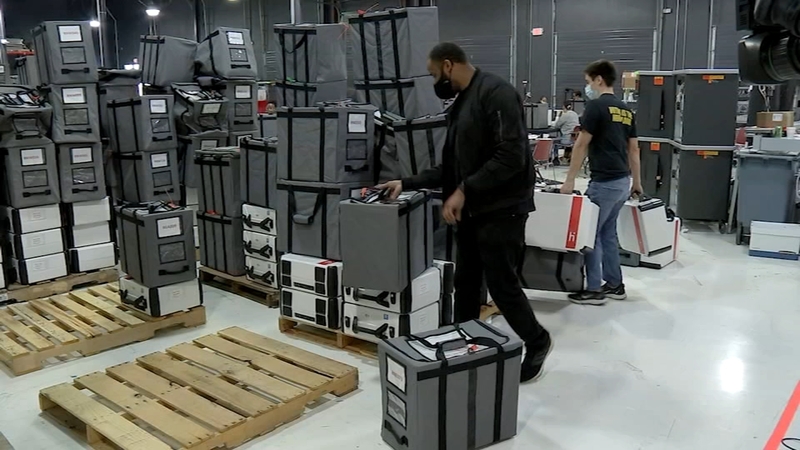 At a court hearing Thursday morning, both Democratic and Republican party officials agreed to withdraw all court proceedings, and let the vote counting process go forward under standard policy.

Officials finished counting the ballots overnight, after a judge extended the deadline to file election results with the state.

As of 6 p.m. Wednesday, an hour before the initial deadline, election officials said they learned that the Harris County GOP had filed an impoundment petition seeking to extend the deadline and to demand the county turn over any election materials if they miss the new deadline.

The new deadline was set at 11 a.m. Thursday, but according to the county's elections website, all votes have been counted. The county released the unofficial results overnight.

The 2022 Texas Primary Election was the first election since SB1 was passed in the state and tougher voting laws were put into effect and since Harris County got brand new voting machines, which print out paper ballots.

All of that has played a role in delaying the vote-counting process.

Stevens emphasized that the paper ballots slow down the process for everyone -- voters and election workers alike.

"Some of the incidents that occur with paper are then looked at by our central counting station, which is, again, manned by both political parties," Stevens said. "That is part of the process here, but is not the majority by any means."

WATCH: Harris County workers were confident Wednesday morning that the deadline to get the votes counted would be met.

By 2026, every county in the state will have to use paper ballots just like Harris County. Stevens said other counties in Texas that are already using paper ballots were also taking longer to process.

Voters in Harris County had their choices marked on two separate sheets of paper in Tuesday's election, and those two sheets then had to be inserted into the scanner one at a time. Harris County Elections Administrator Isabel Longoria said some voters put both in at the same time, damaging the ballots.

For now, Harris County says all of the votes have been counted, but that doesn't mean that there are no questions.

☑️ The unofficial results from the March 1 Primary Election have been released.https://t.co/VX8hqNndNNhttps://t.co/4jPAItghE2#YourVoteYourVoice #HarrisVotes pic.twitter.com/baO9UQeM7P

Over the past two days, the Democratic and Republican parties, who are actually the ones responsible for running the primaries, have raised issues.

The Republican party raised issues about the election administrator's work in conducting the election. The party has even gone to court, to make sure there is enough time to count the votes.

Right now, it appears the votes are counted. But, officials have 10 days to canvass the whole election and make it official.

Stevens said paper ballots and damaged ballots weren't the only delays in the process. Finding enough election judges for Democrats and Republicans has also been an issue.

"The Texas Election Code has been some of the strictest in the country -- and that was pre-SB1. SB1 has tightened that down even more," Stevens said. "Quite frankly, we've seen election officials, so people who have been judges before, been clerks before, decline to do that anymore because of their fear repercussions related to tightening of the voting laws."