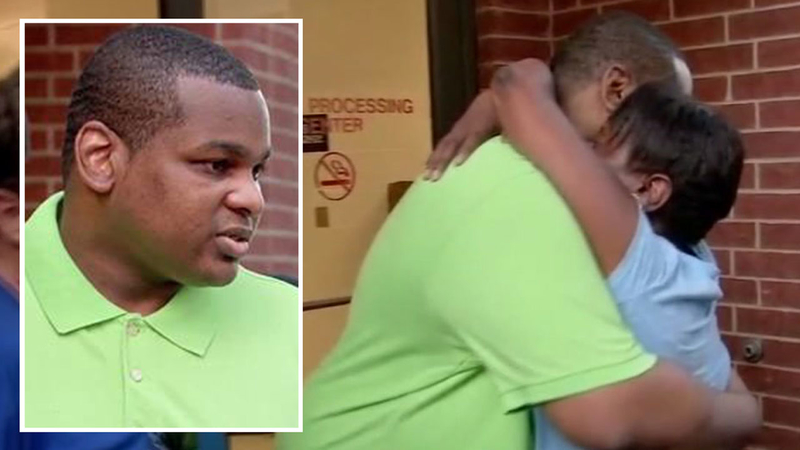 A state agency shouldn't have denied compensation to a man who was wrongfully imprisoned - including for nearly a decade on death row - for the fatal shooting of a Houston police officer, the Texas Supreme Court ruled Friday.

After a judge signed an order in May 2019 declaring Alfred Dewayne Brown innocent in the April 2003 slaying of Officer Charles Clark during a robbery of a check-cashing store, Brown was eligible for nearly $2 million in compensation under state law. He spent more than 12 years in prison.

But the Texas Comptroller's office, which awards money to individuals who have been wrongfully imprisoned, rejected Brown's application. The comptroller's office had argued it was not sure the judge who declared Brown innocent had the jurisdiction to do so because of a previous order in the case.

But in an 18-page ruling, the Texas Supreme Court determined the comptroller's office had exceeded its authority when it weighed in on the judge's legal authority in declaring Brown innocent.

The court said state law gives the Comptroller's office a "purely ministerial" duty to determine a claimant's eligibility for wrongful-imprisonment compensation by reviewing the required documentation and not to decide if such documents were "correctly issued as a legal or factual matter."

"We direct the Comptroller to... compensate Brown for the time he was wrongfully imprisoned," Justice Eva Guzman wrote for the court.

Brown's attorney, Neal Manne, said he was thrilled his client "will now receive a small measure of justice from the state of Texas."

"Now I think (Brown) can finally close this chapter of his life knowing that the very highest court in Texas unanimously agreed he was treated wrongly and that he's entitled to be compensated for it," said Manne, whose firm Susman Godfrey represented Brown for free in his case.

Manne called the decision by the Comptroller's office to reject Brown's request for compensation a "political decision."

Last year, the Houston Chronicle reported Texas Attorney General Ken Paxton had urged the Comptroller's office in a letter to deny Brown compensation because he had questions about his innocence. One week after the letter was received, Brown's application was denied.

Chris Bryan, a spokesman for the comptroller's office, said his agency intends to comply with the court's order and will begin the process of compensating Brown.

"The Comptroller's office makes determinations in these claims based on the documentation provided. This claim was no exception, and the claim followed a process that ensures the law is executed properly, including Mr. Brown's right under the law to appeal his claim to the Supreme Court," Bryan said in an email.

The widow of the slain officer and the Houston Police Officers' Union have continued to say they believe Brown is guilty of Clark's murder.

In 2014, the Texas Court of Criminal Appeals threw out Brown's conviction and death sentence after it determined prosecutors failed to disclose phone records that supported his alibi. Brown had maintained his innocence, saying he was home at the time of the robbery. The phone records were discovered in 2013 after a homicide investigator found them in his garage.

In 2015, Brown was set free after prosecutors dismissed the capital murder charge against him.

A special prosecutor appointed by Harris County District Attorney Kim Ogg announced in May 2019 that Brown was innocent, blaming his wrongful conviction on prosecutorial misconduct.

After his release from prison, Brown moved to Louisiana and now works as a truck driver.

Manne said Brown, 38, is a down-to-earth person who enjoys his work and has "rebuilt his life after the cruel injustice of wrongly being put on death row."

"It was really just very typical of Mr. Brown that he paused for a moment to enjoy the fact that he has won this ruling and he's going to receive all this compensation that was owed to him and then he said, 'OK. Well, I've got to get back to work. I've got a job,'" Manne said.
Report a correction or typo
Related topics:
police officer killedarrestman killedwrongful conviction
Copyright © 2022 by The Associated Press. All Rights Reserved.
WRONGFUL CONVICTION
2 men convicted in 1965 assassination of Malcolm X to be cleared
Woman details surviving attack by serial killer Tommy Lynn Sells
Prosecutors call for innocent man's release from prison, but existing law prevents it
Group behind man's exoneration looking at similar cases
TOP STORIES
Timeline breaks down Uvalde shooter's movements day of massacre
Protests planned against NRA meeting following Uvalde deadly shooting
3 dead in apparent murder-suicide in NW Harris Co., sheriff says
TX school shooting leaves at least 19 children, 2 adults dead
Our coolest morning in nearly a month
Here's what to know about NRA meeting in Houston
Uvalde school shooting: What we know about 19 kids, 2 teachers killed
Show More
Beto O'Rourke confronts Texas gov. at Uvalde shooting press conference
Houston mayor after shooting in Uvalde: 'Our values are messed up'
HISD staff encourage talking with kids about Uvalde tragedy
Where do Texas gun laws stand?
Mother of Houston Olympic champion receives donated food truck
More TOP STORIES News