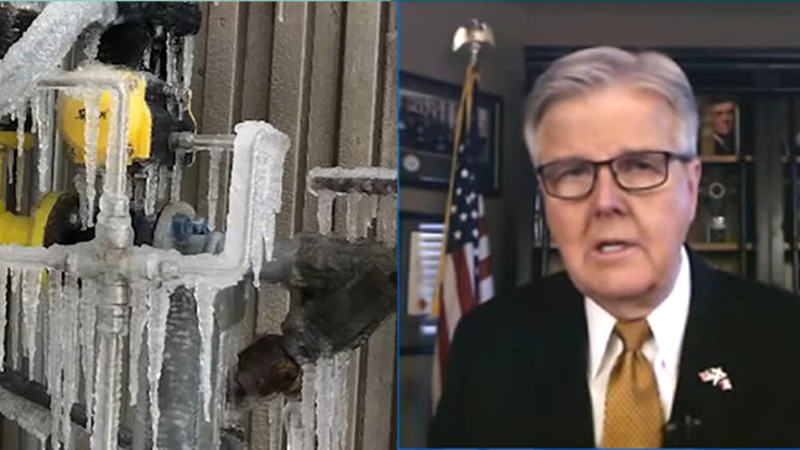 As power returns to normal across Texas and thousands begin to clean up damage from this week's winter storm, Lt. Gov. Dan Patrick promises an investigation into what went wrong with the state's power grid that kept thousands in the dark and freezing for days.

ERCOT promised state leaders that the grid was ready for this week's winter weather, according to Patrick, only to admit days later that it was minutes away from a complete failure before blackouts were implemented.

"So we start investigations in the Senate," Patrick said Friday in an appearance on ABC's GMA3. "I'm President of the Senate. We start that this week, and we're going get to the bottom of this and find out what the hell happened, and we're going to fix it."

Despite the claim about ERCOT officials saying before the storm that the power grid was ready, a claim echoed by Gov. Greg Abbott this week, Patrick told ABC's TJ Holmes and Amy Robach that he's not passing judgement on who's to blame. You can watch the entire interview in the video above.

"You're clearly saying that (ERCOT) misrepresented or perhaps even downright lied about their ability to be prepared for something like this," Robach challenged. "So you've got an investigation going now, what should happen from this investigation? Should people be criminally charged? What do you think needs to happen going forward? A) To make sure it doesn't happen again, and B) That certain people who may need to pay the price for what did happen pay that price?"

RELATED: Texas power crisis: ERCOT says outages could have lasted months if decision not made at storm's start

"That's what an investigation is for," Patrick answered. "I'm not going to leap out in front and say whose fault it was, but I will say this to your point. You have three systems. You have those who generate power, the generators and you have ERCOT that oversees them. So if ERCOT is telling leadership that they are ready and prepared, as of last week, for this winter storm, and it was worse than anyone expected or lasted longer, for sure, but still, they said they're prepared. Either the generators were wrong or misled them, or ERCOT was wrong or misled them. I'm not going to go out and say someone purposely lied and covered up anything."

Leaders of ERCOT, the nonprofit council that oversees the power supply for more than 26 million Texans, defended their decisions during the winter storm, saying the demand for power combined with weather-related problems could have been worse if rolling blackouts had not been implemented.

Outages that remained Friday were due to downed lines and other distribution problems and were no longer due to generation gaps.

Patrick was at odds with Holmes during Friday's interview, over comments made last summer about California's energy crisis happened when Democrats were in charge of that state. The conversation turned to Texas politics and the GOP's longtime control of state government.

This is what happens when the Democrats are left in charge. Why California’s liberal climate policies are causing electricity blackouts: https://t.co/GE1FzadHM4#KAG

"TJ, it hasn't been a problem for a long time," Patrick said. "It became a problem this week. We believe that, you know, we had not had a problem."

"Sir, you were warned in 2011 by federal regulators," Holmes interrupted. "That was incorrect to say that this only became a problem this week. Not correct."

The reference was in regards to a report by a federal agency that found "ERCOT and the generators within ERCOT could better coordinate generator scheduled outages." ERCOT cut power to at least a million homes during a 2011 winter storm.

TED OBERG INVESTIGATES: 'Time will tell' what Texas could have done to prepare for mass outages

"TJ, I don't want to be lectured by you," Patrick shot back. "What we were told 11 years ago was to make these corrections and winterize the system. We made those recommendations. And for the last 10 years, to our knowledge, everything has worked. Because we haven't had this problem. We had some brownouts, but we haven't had this severe breakdown."

Patrick went on to explain his earlier comments about California.

"The difference between California and Texas is this, TJ, and the Democrats and the Republicans - What we've learned in this, and this is not about a blame game. When all this started, by the way, it was Democrats that controlled the line, but no finger pointing. People don't want to hear this, TJ. They don't want to hear you and I arguing or Republicans and Democrats. They want their heat on, they want their water running, and they want to be able to go back to their life normal."
Report a correction or typo
Related topics:
texaselectricgmatexas politicstexas newswinter stormpower outageabc newswinter weather
Copyright © 2021 KTRK-TV. All Rights Reserved.
TOP STORIES
HPD responding to reports of a shooting on the East Loop
Man paralyzed by shooting sparks peace rally in Greenspoint
A few storms possible Thursday, better rain chances next week
Remembering a legend: ABC13's Marvin Zindler
Missouri City gym owner admits error after COVID outbreak
Unaccompanied minor among 19 in human smuggling case, HPD says
ZZ Top bassist Dusty Hill dies at 72
Show More
Tsunami warning issued for parts of Alaska after 8.2 quake
Houston restaurant is ode to ZZ Top and iconic music
Tens of thousands apply on day one for Harris County Recovery relief
Man accused of luring 15-year-old girl from Texas to Florida
HPD seeks help finding non-verbal 48-year-old man last seen July 13
More TOP STORIES News