Why does it take so long for rape kits to get tested?

HOUSTON (KTRK) -- Thousands of criminal cases across Texas are on hold as the Texas Department of Public Safety waits to test crucial DNA evidence, an ABC13 investigation reveals. It's not a surprise. It's gone on for years and, despite repeated pleas to Texas lawmakers for more staffers, the DPS DNA lab is still dramatically short-staffed.

Our investigation began after Angela, an alleged sexual assault survivor, contacted ABC13 Investigates hoping we could help draw attention to her case and the delays. Angela does not want her last name used, but is eager to tell her story in the hope DPS will change. "We shouldn't have to wait," she insisted. "It's like being victimized over and over and over again."

Angela claims she was sexually assaulted in March 2016 in Pearland. That night, she went through the invasive process to collect DNA sexual assault evidence at a nearby hospital. After weeks of waiting and not hearing about her results, a DPS lab supervisor told her it would take 278 days to get her evidence tested.

"278 days is like living in hell from the day this happened. It's ridiculous. They need to get funding from something else," she said.

The detective assigned to Angela's case at the Pearland Police Department says charges can't be filed until the evidence is returned.

As of today, it still hasn't been finalized.

In the meantime, her alleged assailant remains free. As she thought about the delay, Angela worried about other potential victims. "I hope I am the last victim," Angela told us, but couldn't guarantee it hasn't happened again since March. "No one can."

The 278-day turnaround on her case is only slightly longer than the 256-day average time for a DNA test at the DPS lab in Houston, one of many the department has around the state. DPS does not separate out sexual assault DNA in that statistic. By comparison, if Angela's alleged sexual assault occurred less than 2 miles away in either Harris County or Houston, it is likely her evidence would be tested far quicker. The Houston Forensic Science Center -- which tests Houston Police Department evidence -- processes sexual assault DNA in 25 days. The Harris County Institute of Forensic Sciences handles that evidence in 53 days.

Both Houston and Harris County have their own labs. Most other local agencies in Texas do not. Hundreds of police departments and sheriff's offices across the state do not have the resources or demand for their own lab and rely on DPS to test criminal evidence. DPS does not charge local agencies for such testing. 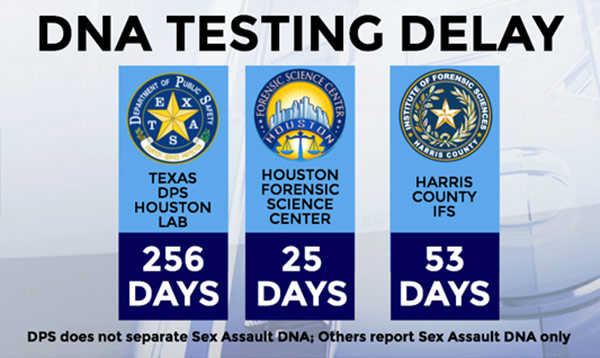 Skylor Hearn, the DPS Assistant Director in charge of the department's labs, doesn't deny any of it. "We stress quality over expediency, but we recognize expediency is important," Hearn told ABC13 during an interview at DPS' Austin headquarters. When asked simply if these results are taking too long, Hearn replied, "Yes."

The department is mandated by state rules to test this type of evidence within 90 days. The department is not even close and hasn't been in compliance with the 90-day 'performance measure' since 2014.

The delays are not limited solely to sexual assault evidence. While DPS labs can turn around blood alcohol testing in 30 days, drug toxicology takes twice as long. In the DPS lab in Houston, drug testing takes 151 days on average. DPS' goal is 30 days.

"There's more [evidence] requested than we can produce," Hearn explained as he laid out DPS' expanding DNA workload.

In 2011, Texas enacted laws forcing law enforcement agencies to test thousands of backlogged sexual assault kits. It also mandates the testing of all sexual assault DNA evidence. That was not always the case. It dramatically increased DPS' workload. Texas lawmakers approved funding to outsource backlogged testing, but did not add any new personnel to the DPS DNA labs.

It is a trend that's repeated itself every legislative session since.

In 2013, lawmakers added more mandatory DNA testing, but approved half of the requested new lab positions.

In 2015, DPS requested 35 new employees. The agency was allowed to hire ten.

In the last five years combined, DPS has asked for 100 new positions. They've been granted 40.

DPS Assistant Director Hearn is now asking budget writers for 60 new positions, which would grow his lab staffing by 10%. "Throwing people at the problem is not always the answer, but in this case it is part of this solution," Hearn said.

State Senator Joan Huffman is a Republican lawmaker from Houston. She is a former prosecutor and judge. She reviewed DPS' budget in the last session and told ABC13 Investigates, "Clearly this [delay] is unacceptable." Huffman suggests a 30-day turnaround is worth striving for. That is the deadline in Houston.

In Texas' last legislative session, border funding was the largest discussion. Sen. Huffman did not recall DPS suggesting the personnel shortfall was as severe as the ABC13 Investigation revealed. "We felt they had what they needed based on the information we had at the time." Heading into the legislative session next year, Huffman told ABC13, "We need to figure out what's not working so we can get better results." 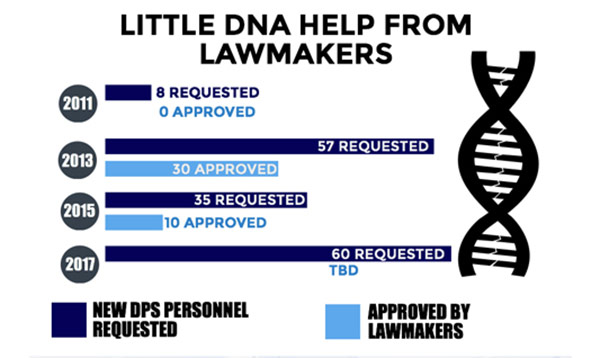 "We recognize this is very important to the victims, to the criminal justice system as a whole. We are doing everything we can to be effective with the current resources we have. We would love to have more resources."

In the meantime, DPS tries to shuffle cases between labs when one region may have fewer cases than another. The department has outsourced some testing with available funding, and is using some extra money to hire temporary personnel. Additionally, DPS has limited some evidence from being tested in cases where the tests would not be effective.

Recently the agency has worked with local law enforcement agencies that pay for their own DPS scientist. DPS says Harris County, Montgomery County, Williamson County and the City of San Antonio all give local cash to DPS to dedicate a lab position to work from that county. It gives DPS needed resources and saves the localities money by not having to start up their own labs.

Elsewhere some local agencies are looking to avoid the DPS delays altogether. When Galveston County Sheriff Henry Trochesset did the math, he realized he is spending more housing some inmates who are waiting for results than he would on paying a private lab to do the work instead of DPS, which does not charge counties.

"If you're sitting in the jail and it costs $80 per day. In 10 days that's $800. If it goes to 6 months or a year, it adds up," Trochesset told ABC13. Trochesset is currently talking with county commissioners about outsourcing. 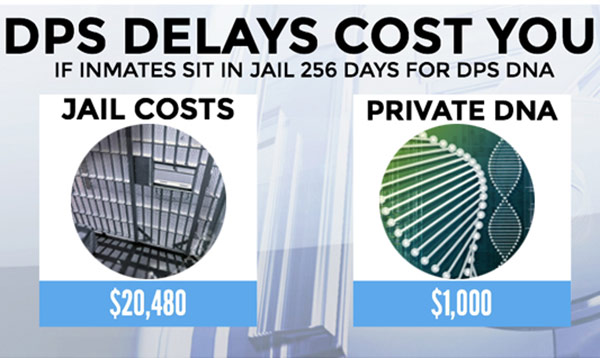