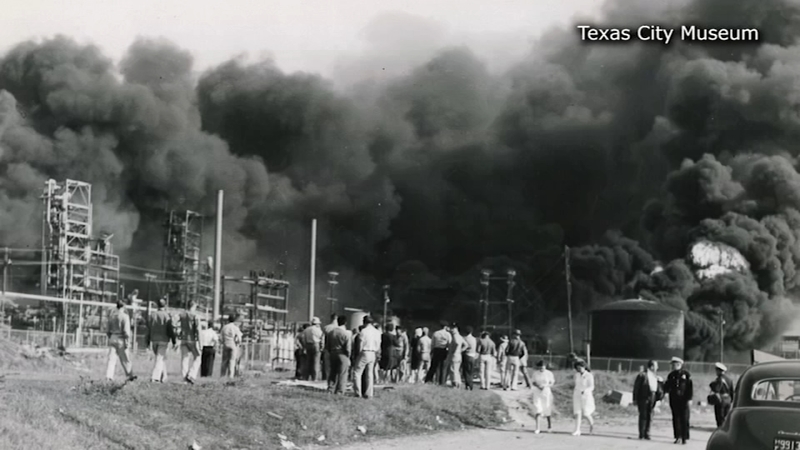 TEXAS CITY, Texas (KTRK) -- Two survivors remember the horror of the massive explosion at the Texas City port that killed hundreds of people on April 16, 1947.

"Now, when it blew, it was like something you'd never seen or heard before," said Ellison. "They were trying to cool down the ship while it was smothering and smoking before it blew. Just imagine all those firemen on top of a time bomb. Very few of them, if any, were ever found."

Amanda Vance with the Texas City Museum said the S.S. Grandcamp was in port. Workers loaded it with tons of ammonium nitrate bound for Europe to help with World War II recovery.

The French cargo ship already had fuel, oil, and ammunition in its cargo hold.

"The official cause of the disaster is that someone had dropped a cigarette," said Vance. "Down into the hull."

The Texas City Volunteer Fire Department was called, but the fire continued to grow, and the ship's hold continued to get hotter. According to the Texas City Library, the ship's captain tried to extinguish the fire by forcing steam into the cargo holds. Still, the steam vapors liquefied the ammonium nitrate to produce nitrous oxide, an extremely volatile substance.

At 9:12 a.m., the Grandcamp blew up and sent shrapnel high in the sky. The explosion triggered a 15-foot wave and a chain reaction of destruction. It destroyed a nearby chemical plant and killed people in its path, including 28 Texas City Fire Department members.

The fire continued to burn until the following afternoon. On April 17, ammonium nitrate on a second ship, The High Flyer, exploded. That blast killed two more people and destroyed a nearby ship.

Chunks of fiery debris rained down on the city. The disaster left thousands injured and destroyed hundreds of homes.

According to the Texas City Library, the high school gym was converted into a temporary morgue, and a local auto mechanic's garage was used as an embalming room.

Survivors gather every year on the anniversary at Memorial Park in Texas City to honor the lives lost.